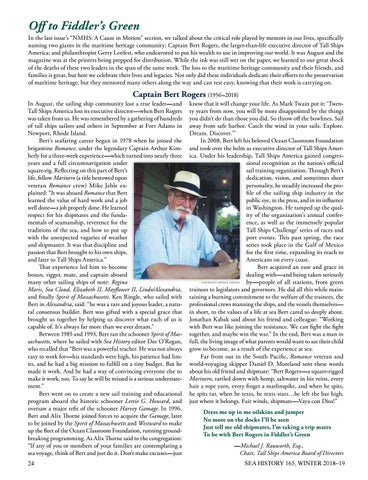 Off to Fiddler’s Green In the last issue’s “NMHS: A Cause in Motion” section, we talked about the critical role played by mentors in our lives, specifically naming two giants in the maritime heritage community: Captain Bert Rogers, the larger-than-life executive director of Tall Ships America; and philanthropist Gerry Lenfest, who endeavored to put his wealth to use in improving our world. It was August and the magazine was at the printers being prepped for distribution. While the ink was still wet on the paper, we learned to our great shock of the deaths of these two leaders in the span of the same week. The loss to the maritime heritage community and their friends, and families is great, but here we celebrate their lives and legacies. Not only did these individuals dedicate their efforts to the preservation of maritime heritage, but they mentored many others along the way and can rest easy, knowing that their work is carrying on.

Captain Bert Rogers (1956–2018) In August, the sailing ship community lost a true leader—and Tall Ships America lost its executive director—when Bert Rogers was taken from us. He was remembered by a gathering of hundreds of tall ships sailors and others in September at Fort Adams in Newport, Rhode Island. Bert’s seafaring career began in 1978 when he joined the brigantine Romance, under the legendary Captain Arthur Kimberly for a three-week experience—which turned into nearly three years and a full circumnavigation under square-rig. Reflecting on this part of Bert’s life, fellow Marinero (a title bestowed upon veteran Romance crew) Mike Jehle explained: “It was aboard Romance that Bert learned the value of hard work and a job well done—a job properly done. He learned respect for his shipmates and the fundamentals of seamanship, reverence for the traditions of the sea, and how to put up with the unexpected vagaries of weather and shipmaster. It was that discipline and passion that Bert brought to his own ships, and later to Tall Ships America.” That experience led him to become bosun, rigger, mate, and captain aboard many other sailing ships of note: Regina Maris, Sea Cloud, Elizabeth II, Mayflower II, Lindo/Alexandria, and finally Spirit of Massachusetts. Ken Ringle, who sailed with Bert in Alexandria, said: “he was a rare and joyous leader, a natural consensus builder. Bert was gifted with a special grace that brought us together by helping us discover what each of us is capable of. It’s always far more than we ever dream.” Between 1985 and 1993, Bert ran the schooner Spirit of Massachusetts, where he sailed with Sea History editor Dee O’Regan, who recalled that “Bert was a powerful teacher. He was not always easy to work for—his standards were high, his patience had limits, and he had a big mission to fulfill on a tiny budget. But he made it work. And he had a way of convincing everyone else to make it work, too. To say he will be missed is a serious understatement.” Bert went on to create a new sail training and educational program aboard the historic schooner Lettie G. Howard, and oversaw a major refit of the schooner Harvey Gamage. In 1996, Bert and Alix Thorne joined forces to acquire the Gamage, later to be joined by the Spirit of Massachusetts and Westward to make up the fleet of the Ocean Classroom Foundation, running groundbreaking programming. As Alix Thorne said to the congregation: “If any of you or members of your families are contemplating a sea voyage, think of Bert and just do it. Don’t make excuses—just 24

know that it will change your life. As Mark Twain put it: ‘Twenty years from now, you will be more disappointed by the things you didn’t do than those you did. So throw off the bowlines. Sail away from safe harbor. Catch the wind in your sails. Explore. Dream. Discover.’” In 2008, Bert left his beloved Ocean Classroom Foundation and took over the helm as executive director of Tall Ships America. Under his leadership, Tall Ships America gained congressional recognition as the nation’s official sail training organization. Through Bert’s dedication, vision, and sometimes sheer personality, he steadily increased the profile of the sailing ship industry in the public eye, in the press, and in its influence in Washington. He ramped up the quality of the organization’s annual conference, as well as the immensely popular Tall Ships Challenge® series of races and port events. This past spring, the race series took place in the Gulf of Mexico for the first time, expanding its reach to Americans on every coast. Bert acquired an ease and grace in dealing with—and being taken seriously courtesy donna giglio by—people of all stations, from green trainees to legislators and governors. He did all this while maintaining a burning commitment to the welfare of the trainees, the professional crews manning the ships, and the vessels themselves— in short, to the values of a life at sea Bert cared so deeply about. Jonathan Kabak said about his friend and colleague: “Working with Bert was like joining the resistance. We can fight the fight together, and maybe win the war.” In the end, Bert was a man in full, the living image of what parents would want to see their child grow to become, as a result of the experience at sea. Far from out in the South Pacific, Romance veteran and world-voyaging skipper Daniel D. Moreland sent these words about his old friend and shipmate: “Bert Rogers—a square-rigged Marinero, rattled down with hemp, saltwater in his veins, every hair a rope yarn, every finger a marlinspike, and when he spits, he spits tar, when he texts, he texts stars…he left the bar high, just where it belongs. Fair winds, shipmate—Vaya con Dios!” Dress me up in me oilskins and jumper No more on the docks I’ll be seen Just tell me old shipmates, I’m taking a trip mates To be with Bert Rogers in Fiddler’s Green —Michael J. Rauworth, Esq., Chair, Tall Ships America Board of Directors SEA HISTORY 165, WINTER 2018–19