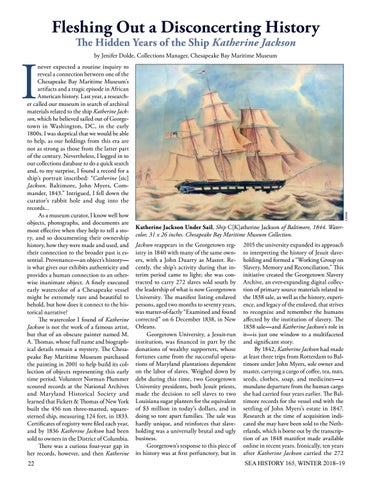 never expected a routine inquiry to reveal a connection between one of the Chesapeake Bay Maritime Museum’s artifacts and a tragic episode in African American history. Last year, a researcher called our museum in search of archival materials related to the ship Katherine Jackson, which he believed sailed out of Georgetown in Washington, DC, in the early 1800s. I was skeptical that we would be able to help, as our holdings from this era are not as strong as those from the latter part of the century. Nevertheless, I logged in to our collections database to do a quick search and, to my surprise, I found a record for a ship’s portrait inscribed: “Catherine [sic] Jackson. Baltimore, John Myers, Commander, 1843.” Intrigued, I fell down the curator’s rabbit hole and dug into the records... As a museum curator, I know well how objects, photographs, and documents are most effective when they help to tell a story, and so documenting their ownership history, how they were made and used, and their connection to the broader past is essential. Provenance—an object’s history— is what gives our exhibits authenticity and provides a human connection to an otherwise inanimate object. A finely executed early watercolor of a Chesapeake vessel might be extremely rare and beautiful to behold, but how does it connect to the historical narrative? The watercolor I found of Katherine Jackson is not the work of a famous artist, but that of an obscure painter named M. A. Thomas, whose full name and biographical details remain a mystery. The Chesapeake Bay Maritime Museum purchased the painting in 2001 to help build its collection of objects representing this early time period. Volunteer Norman Plummer scoured records at the National Archives and Maryland Historical Society and learned that Fickett &amp; Thomas of New York built the 456 ton three-masted, squaresterned ship, measuring 124 feet, in 1833. Certificates of registry were filed each year, and by 1836 Katherine Jackson had been sold to owners in the District of Columbia. There was a curious four-year gap in her records, however, and then Katherine 22

Katherine Jackson Under Sail, Ship C[K]atherine Jackson of Baltimore, 1844. Watercolor, 31 x 26 inches. Chesapeake Bay Maritime Museum Collection. Jackson reappears in the Georgetown registry in 1840 with many of the same owners, with a John Duarry as Master. Recently, the ship’s activity during that interim period came to light; she was contracted to carry 272 slaves sold south by the leadership of what is now Georgetown University. The manifest listing enslaved persons, aged two months to seventy years, was matter-of-factly “Examined and found corrected” on 6 December 1838, in New Orleans. Georgetown University, a Jesuit-run institution, was financed in part by the donations of wealthy supporters, whose fortunes came from the successful operations of Maryland plantations dependent on the labor of slaves. Weighed down by debt during this time, two Georgetown University presidents, both Jesuit priests, made the decision to sell slaves to two Louisiana sugar planters for the equivalent of $3 million in today’s dollars, and in doing so tore apart families. The sale was hardly unique, and reinforces that slaveholding was a universally brutal and ugly business. Georgetown’s response to this piece of its history was at first perfunctory, but in

2015 the university expanded its approach to interpreting the history of Jesuit slaveholding and formed a “Working Group on Slavery, Memory and Reconciliation.” This initiative created the Georgetown Slavery Archive, an ever-expanding digital collection of primary source materials related to the 1838 sale, as well as the history, experience, and legacy of the enslaved, that strives to recognize and remember the humans affected by the institution of slavery. The 1838 sale—and Katherine Jackson’s role in it—is just one window to a multifaceted and significant story. By 1842, Katherine Jackson had made at least three trips from Rotterdam to Baltimore under John Myers, sole owner and master, carrying a cargo of coffee, tea, nuts, seeds, clothes, soap, and medicines—a mundane departure from the human cargo she had carried four years earlier. The Baltimore records for the vessel end with the settling of John Myers’s estate in 1847. Research at the time of acquisition indicated she may have been sold to the Netherlands, which is borne out by the transcription of an 1848 manifest made available online in recent years. Ironically, ten years after Katherine Jackson carried the 272 SEA HISTORY 165, WINTER 2018–19