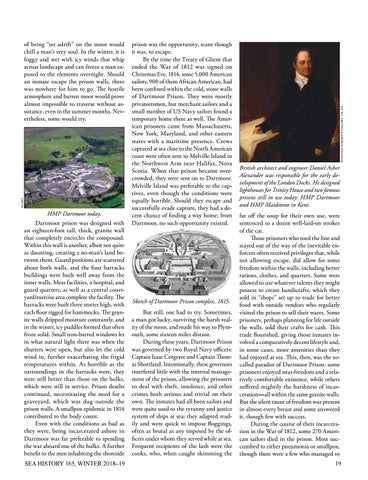 HMP Dartmoor today. Dartmoor prison was designed with an eighteen-foot tall, thick, granite wall that completely encircles the compound. Within this wall is another, albeit not quite as daunting, creating a no-man’s land between them. Guard positions are scattered about both walls, and the four barracks buildings were built well away from the inner walls. Mess facilities, a hospital, and guard quarters, as well as a central courtyard/exercise area complete the facility. The barracks were built three stories high, with each floor rigged for hammocks. The granite walls dripped moisture constantly, and in the winter, icy puddles formed that often froze solid. Small iron-barred windows let in what natural light there was when the shutters were open, but also let the cold wind in, further exacerbating the frigid temperatures within. As horrible as the surroundings in the barracks were, they were still better than those on the hulks, which were still in service. Prison deaths continued, necessitating the need for a graveyard, which was dug outside the prison walls. A smallpox epidemic in 1814 contributed to the body count. Even with the conditions as bad as they were, being incarcerated ashore in Dartmoor was far preferable to spending the war aboard one of the hulks. A further benefit to the men inhabiting the shoreside

prison was the opportunity, scant though it was, to escape. By the time the Treaty of Ghent that ended the War of 1812 was signed on Christmas Eve, 1814, some 5,000 American sailors, 900 of them African American, had been confined within the cold, stone walls of Dartmoor Prison. They were mostly privateersmen, but merchant sailors and a small number of US Navy sailors found a temporary home there as well. The American prisoners came from Massachusetts, New York, Maryland, and other eastern states with a maritime presence. Crews captured at sea close to the North American coast were often sent to Melville Island in the Northwest Arm near Halifax, Nova Scotia. When that prison became overcrowded, they were sent on to Dartmoor. Melville Island was preferable to the captives, even though the conditions were equally horrible. Should they escape and successfully evade capture, they had a decent chance of finding a way home; from Dartmoor, no such opportunity existed.

Sketch of Dartmoor Prison complex, 1815. But still, one had to try. Sometimes, a man got lucky, surviving the harsh reality of the moor, and made his way to Plymouth, some sixteen miles distant. During these years, Dartmoor Prison was governed by two Royal Navy officers: Captain Isaac Cotgrave and Captain Thomas Shortland. Intentionally, these governors interfered little with the internal management of the prison, allowing the prisoners to deal with theft, insolence, and other crimes both serious and trivial on their own. The inmates had all been sailors and were quite used to the tyranny and justice system of ships at sea; they adapted readily and were quick to impose floggings, often as brutal as any imposed by the officers under whom they served while at sea. Frequent recipients of the lash were the cooks, who, when caught skimming the

of being “set adrift” on the moor would chill a man’s very soul. In the winter, it is foggy and wet with icy winds that whip across landscape and can freeze a man exposed to the elements overnight. Should an inmate escape the prison walls, there was nowhere for him to go. The hostile atmosphere and barren moor would prove almost impossible to traverse without assistance, even in the summer months. Nevertheless, some would try.

British architect and engineer Daniel Asher Alexander was responsible for the early development of the London Docks. He designed lighthouses for Trinity House and two famous prisons still in use today: HMP Dartmoor and HMP Maidstone in Kent. fat off the soup for their own use, were sentenced to a dozen well-laid-on strokes of the cat. Those prisoners who toed the line and stayed out of the way of the inevitable enforcers often received privileges that, while not allowing escape, did allow for some freedom within the walls, including better rations, clothes, and quarters. Some were allowed to use whatever talents they might possess to create handicrafts, which they sold in “shops” set up to trade for better food with outside vendors who regularly visited the prison to sell their wares. Some prisoners, perhaps planning for life outside the walls, sold their crafts for cash. This trade flourished, giving those inmates involved a comparatively decent lifestyle and, in some cases, more amenities than they had enjoyed at sea. This, then, was the socalled paradox of Dartmoor Prison: some prisoners enjoyed near-freedom and a relatively comfortable existence, while others suffered mightily the harshness of incarceration—all within the same granite walls. But the silent taunt of freedom was present in almost every breast and some answered it, though few with success. During the course of their incarceration in the War of 1812, some 270 American sailors died in the prison. Most succumbed to either pneumonia or smallpox, though there were a few who managed to