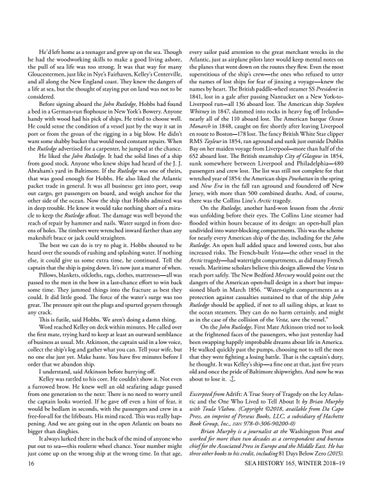 He’d left home as a teenager and grew up on the sea. Though he had the woodworking skills to make a good living ashore, the pull of sea life was too strong. It was that way for many Gloucestermen, just like in Nye’s Fairhaven, Kelley’s Centerville, and all along the New England coast. They knew the dangers of a life at sea, but the thought of staying put on land was not to be considered. Before signing aboard the John Rutledge, Hobbs had found a bed in a German-run flophouse in New York’s Bowery. Anyone handy with wood had his pick of ships. He tried to choose well. He could sense the condition of a vessel just by the way it sat in port or from the groan of the rigging in a big blow. He didn’t want some shabby bucket that would need constant repairs. When the Rutledge advertised for a carpenter, he jumped at the chance. He liked the John Rutledge. It had the solid lines of a ship from good stock. Anyone who knew ships had heard of the J. J. Abraham’s yard in Baltimore. If the Rutledge was one of theirs, that was good enough for Hobbs. He also liked the Atlantic packet trade in general. It was all business: get into port, swap out cargo, get passengers on board, and weigh anchor for the other side of the ocean. Now the ship that Hobbs admired was in deep trouble. He knew it would take nothing short of a miracle to keep the Rutledge afloat. The damage was well beyond the reach of repair by hammer and nails. Water surged in from dozens of holes. The timbers were wrenched inward farther than any makeshift brace or jack could straighten. The best we can do is try to plug it. Hobbs shouted to be heard over the sounds of rushing and splashing water. If nothing else, it could give us some extra time, he continued. Tell the captain that the ship is going down. It’s now just a matter of when. Pillows, blankets, oilcloths, rags, clothes, mattresses—all was passed to the men in the bow in a last-chance effort to win back some time. They jammed things into the fracture as best they could. It did little good. The force of the water’s surge was too great. The pressure spit out the plugs and spurted geysers through any crack. This is futile, said Hobbs. We aren’t doing a damn thing. Word reached Kelley on deck within minutes. He called over the first mate, trying hard to keep at least an outward semblance of business as usual. Mr. Atkinson, the captain said in a low voice, collect the ship’s log and gather what you can. Tell your wife, but no one else just yet. Make haste. You have five minutes before I order that we abandon ship. I understand, said Atkinson before hurrying off. Kelley was rattled to his core. He couldn’t show it. Not even a furrowed brow. He knew well an old seafaring adage passed from one generation to the next: There is no need to worry until the captain looks worried. If he gave off even a hint of fear, it would be bedlam in seconds, with the passengers and crew in a free-for-all for the lifeboats. His mind raced. This was really happening. And we are going out in the open Atlantic on boats no bigger than dinghies. It always lurked there in the back of the mind of anyone who put out to sea—this roulette wheel chance. Your number might just come up on the wrong ship at the wrong time. In that age, 16

every sailor paid attention to the great merchant wrecks in the Atlantic, just as airplane pilots later would keep mental notes on the planes that went down on the routes they flew. Even the most superstitious of the ship’s crew—the ones who refused to utter the names of lost ships for fear of jinxing a voyage—knew the names by heart. The British paddle-wheel steamer SS President in 1841, lost in a gale after passing Nantucket on a New York-toLiverpool run—all 136 aboard lost. The American ship Stephen Whitney in 1847, slammed into rocks in heavy fog off Ireland— nearly all of the 110 aboard lost. The American barque Ocean Monarch in 1848, caught on fire shortly after leaving Liverpool en route to Boston—178 lost. The fancy British White Star clipper RMS Tayleur in 1854, ran aground and sunk just outside Dublin Bay on her maiden voyage from Liverpool—more than half of the 652 aboard lost. The British steamship City of Glasgow in 1854, sunk somewhere between Liverpool and Philadelphia—480 passengers and crew lost. The list was still not complete for that wretched year of 1854: the American ships Powhattan in the spring and New Era in the fall ran aground and foundered off New Jersey, with more than 500 combined deaths. And, of course, there was the Collins Line’s Arctic tragedy. On the Rutledge, another hard-won lesson from the Arctic was unfolding before their eyes. The Collins Line steamer had flooded within hours because of its design: an open-hull plan undivided into water-blocking compartments. This was the scheme for nearly every American ship of the day, including for the John Rutledge. An open hull added space and lowered costs, but also increased risks. The French-built Vesta—the other vessel in the Arctic tragedy—had watertight compartments, as did many French vessels. Maritime scholars believe this design allowed the Vesta to reach port safely. The New Bedford Mercury would point out the dangers of the American open-hull design in a short but impassioned blurb in March 1856. “Water-tight compartments as a protection against casualties sustained to that of the ship John Rutledge should be applied, if not to all sailing ships, at least to the ocean steamers. They can do no harm certainly, and might as in the case of the collision of the Vesta, save the vessel.” On the John Rutledge, First Mate Atkinson tried not to look at the frightened faces of the passengers, who just yesterday had been swapping happily improbable dreams about life in America. He walked quickly past the pumps, choosing not to tell the men that they were fighting a losing battle. That is the captain’s duty, he thought. It was Kelley’s ship—a fine one at that, just five years old and once the pride of Baltimore shipwrights. And now he was about to lose it. Excerpted from Adrift: A True Story of Tragedy on the Icy Atlantic and the One Who Lived to Tell About It by Brian Murphy with Toula Vlahou. (Copyright ©2018, available from Da Capo Press, an imprint of Perseus Books, LLC, a subsidiary of Hachette Book Group, Inc., isbn 978-0-306-90200-0) Brian Murphy is a journalist at the Washington Post and worked for more than two decades as a correspondent and bureau chief for the Associated Press in Europe and the Middle East. He has three other books to his credit, including 81 Days Below Zero (2015). SEA HISTORY 165, WINTER 2018–19