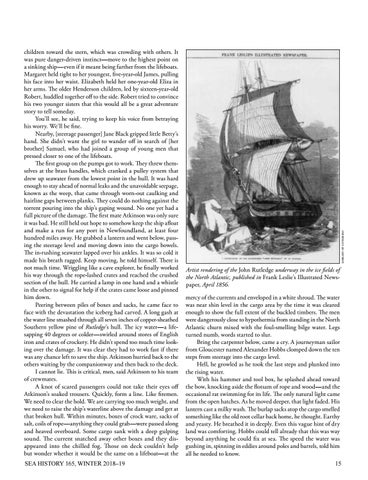 children toward the stern, which was crowding with others. It was pure danger-driven instinct—move to the highest point on a sinking ship—even if it meant being farther from the lifeboats. Margaret held tight to her youngest, five-year-old James, pulling his face into her waist. Elizabeth held her one-year-old Eliza in her arms. The older Henderson children, led by sixteen-year-old Robert, huddled together off to the side. Robert tried to convince his two younger sisters that this would all be a great adventure story to tell someday. You’ll see, he said, trying to keep his voice from betraying his worry. We’ll be fine. Nearby, [steerage passenger] Jane Black gripped little Betty’s hand. She didn’t want the girl to wander off in search of [her brother] Samuel, who had joined a group of young men that pressed closer to one of the lifeboats. The first group on the pumps got to work. They threw themselves at the brass handles, which cranked a pulley system that drew up seawater from the lowest point in the hull. It was hard enough to stay ahead of normal leaks and the unavoidable seepage, known as the weep, that came through worn-out caulking and hairline gaps between planks. They could do nothing against the torrent pouring into the ship’s gaping wound. No one yet had a full picture of the damage. The first mate Atkinson was only sure it was bad. He still held out hope to somehow keep the ship afloat and make a run for any port in Newfoundland, at least four hundred miles away. He grabbed a lantern and went below, passing the steerage level and moving down into the cargo bowels. The in-rushing seawater lapped over his ankles. It was so cold it made his breath ragged. Keep moving, he told himself. There is not much time. Wriggling like a cave explorer, he finally worked his way through the rope-lashed crates and reached the crushed section of the hull. He carried a lamp in one hand and a whistle in the other to signal for help if the crates came loose and pinned him down. Peering between piles of boxes and sacks, he came face to face with the devastation the iceberg had carved. A long gash at the water line smashed through all seven inches of copper-sheathed Southern yellow pine of Rutledge’s hull. The icy water—a lifesapping 40 degrees or colder—swirled around stores of English iron and crates of crockery. He didn’t spend too much time looking over the damage. It was clear they had to work fast if there was any chance left to save the ship. Atkinson hurried back to the others waiting by the companionway and then back to the deck. I cannot lie. This is critical, men, said Atkinson to his team of crewmates. A knot of scared passengers could not take their eyes off Atkinson’s soaked trousers. Quickly, form a line. Like firemen. We need to clear the hold. We are carrying too much weight, and we need to raise the ship’s waterline above the damage and get at that broken hull. Within minutes, boxes of crock ware, sacks of salt, coils of rope—anything they could grab—were passed along and heaved overboard. Some cargo sank with a deep gulping sound. The current snatched away other boxes and they disappeared into the chilled fog. Those on deck couldn’t help but wonder whether it would be the same on a lifeboat—at the

Artist rendering of the John Rutledge underway in the ice fields of the North Atlantic, published in Frank Leslie’s Illustrated Newspaper, April 1856. mercy of the currents and enveloped in a white shroud. The water was near shin level in the cargo area by the time it was cleared enough to show the full extent of the buckled timbers. The men were dangerously close to hypothermia from standing in the North Atlantic churn mixed with the foul-smelling bilge water. Legs turned numb, words started to slur. Bring the carpenter below, came a cry. A journeyman sailor from Gloucester named Alexander Hobbs clomped down the ten steps from steerage into the cargo level. Hell, he growled as he took the last steps and plunked into the rising water. With his hammer and tool box, he splashed ahead toward the bow, knocking aside the flotsam of rope and wood—and the occasional rat swimming for its life. The only natural light came from the open hatches. As he moved deeper, that light faded. His lantern cast a milky wash. The burlap sacks atop the cargo smelled something like the old root cellar back home, he thought. Earthy and yeasty. He breathed it in deeply. Even this vague hint of dry land was comforting. Hobbs could tell already that this was way beyond anything he could fix at sea. The speed the water was gushing in, spinning in eddies around poles and barrels, told him all he needed to know.