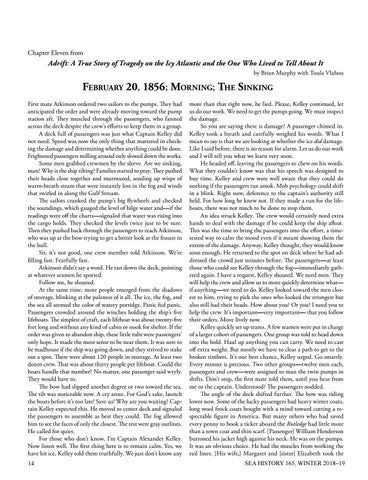 Adrift: A True Story of Tragedy on the Icy Atlantic and the One Who Lived to Tell About It by Brian Murphy with Toula Vlahou

February 20, 1856; Morning; The Sinking First mate Atkinson ordered two sailors to the pumps. They had anticipated the order and were already moving toward the pump station aft. They muscled through the passengers, who fanned across the deck despite the crew’s efforts to keep them in a group. A deck full of passengers was just what Captain Kelley did not need. Speed was now the only thing that mattered in checking the damage and determining whether anything could be done. Frightened passengers milling around only slowed down the works. Some men grabbed crewmen by the sleeve. Are we sinking, man? Why is the ship tilting? Families started to pray. They pushed their heads close together and murmured, sending up wisps of warm-breath steam that were instantly lost in the fog and winds that swirled in along the Gulf Stream. The sailors cranked the pump’s big flywheels and checked the soundings, which gauged the level of bilge water and—if the readings were off the charts—signaled that water was rising into the cargo holds. They checked the levels twice just to be sure. Then they pushed back through the passengers to reach Atkinson, who was up at the bow trying to get a better look at the fissure in the hull. Sir, it’s not good, one crew member told Atkinson. We’re filling fast. Fearfully fast. Atkinson didn’t say a word. He ran down the deck, pointing at whatever seamen he spotted. Follow me, he shouted. At the same time, more people emerged from the shadows of steerage, blinking at the paleness of it all. The ice, the fog, and the sea all seemed the color of watery porridge. Panic fed panic. Passengers crowded around the winches holding the ship’s five lifeboats. The simplest of craft, each lifeboat was about twenty-five feet long and without any kind of cabin or nook for shelter. If the order was given to abandon ship, these little tubs were passengers’ only hope. It made the most sense to be near them. It was sure to be madhouse if the ship was going down, and they strived to stake out a spot. There were about 120 people in steerage. At least two dozen crew. That was about thirty people per lifeboat. Could the boats handle that number? No matter, one passenger said wryly. They would have to. The bow had slipped another degree or two toward the sea. The tilt was noticeable now. A cry arose. For God’s sake, launch the boats before it’s too late! Save us! Why are you waiting? Captain Kelley expected this. He moved to center deck and signaled the passengers to assemble as best they could. The fog allowed him to see the faces of only the closest. The rest were gray outlines. He called for quiet. For those who don’t know, I’m Captain Alexander Kelley. Now listen well. The first thing here is to remain calm. Yes, we have hit ice, Kelley told them truthfully. We just don’t know any 14

more than that right now, he lied. Please, Kelley continued, let us do our work. We need to get the pumps going. We must inspect the damage. So you are saying there is damage? A passenger chimed in. Kelley took a breath and carefully weighed his words. What I mean to say is that we are looking at whether the ice did damage. Like I said before, there is no reason for alarm. Let us do our work and I will tell you what we learn very soon. He headed off, leaving the passengers to chew on his words. What they couldn’t know was that his speech was designed to buy time. Kelley and crew were well aware that they could do nothing if the passengers ran amok. Mob psychology could shift in a blink. Right now, deference to the captain’s authority still held. For how long he knew not. If they made a run for the lifeboats, there was not much to be done to stop them. An idea struck Kelley. The crew would certainly need extra hands to deal with the damage if he could keep the ship afloat. This was the time to bring the passengers into the effort, a timetested way to calm the mood even if it meant showing them the extent of the damage. Anyway, Kelley thought, they would know soon enough. He returned to the spot on deck where he had addressed the crowd just minutes before. The passengers—at least those who could see Kelley through the fog—immediately gathered again. I have a request, Kelley shouted. We need men. They will help the crew and allow us to more quickly determine what— if anything—we need to do. Kelley looked toward the men closest to him, trying to pick the ones who looked the strongest but also still had their heads. How about you? Or you? I need you to help the crew. It’s important—very important— that you follow their orders. Move lively now. Kelley quickly set up teams. A few seamen were put in charge of a larger cohort of passengers. One group was told to head down into the hold. Haul up anything you can carry. We need to cast off extra weight. But mostly we have to clear a path to get to the broken timbers. It’s our best chance, Kelley urged. Go smartly. Every minute is precious. Two other groups—twelve men each, passengers and crew—were assigned to man the twin pumps in shifts. Don’t stop, the first mate told them, until you hear from me or the captain. Understood? The passengers nodded. The angle of the deck shifted further. The bow was riding lower now. Some of the lucky passengers had heavy winter coats, long wool frock coats bought with a mind toward cutting a respectable figure in America. But many others who had saved every penny to book a ticket aboard the Rutledge had little more than a town coat and thin scarf. [Passenger] William Henderson buttoned his jacket high against his neck. He was on the pumps. It was an obvious choice. He had the muscles from working the rail lines. [His wife,] Margaret and [sister] Elizabeth took the SEA HISTORY 165, WINTER 2018–19