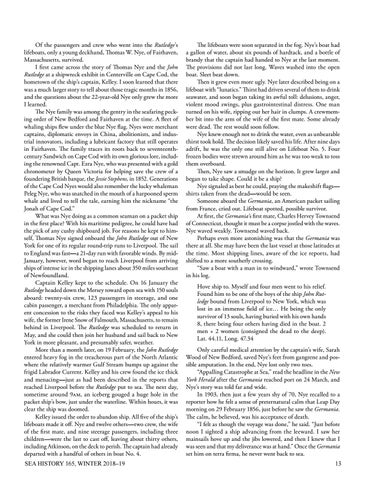 Of the passengers and crew who went into the Rutledge’s lifeboats, only a young deckhand, Thomas W. Nye, of Fairhaven, Massachusetts, survived. I first came across the story of Thomas Nye and the John Rutledge at a shipwreck exhibit in Centerville on Cape Cod, the hometown of the ship’s captain, Kelley. I soon learned that there was a much larger story to tell about those tragic months in 1856, and the questions about the 22-year-old Nye only grew the more I learned. The Nye family was among the gentry in the seafaring pecking order of New Bedford and Fairhaven at the time. A fleet of whaling ships flew under the blue Nye flag. Nyes were merchant captains, diplomatic envoys in China, abolitionists, and industrial innovators, including a lubricant factory that still operates in Fairhaven. The family traces its roots back to seventeenthcentury Sandwich on Cape Cod with its own glorious lore, including the renowned Capt. Ezra Nye, who was presented with a gold chronometer by Queen Victoria for helping save the crew of a foundering British barque, the Jessie Stephens, in 1852. Generations of the Cape Cod Nyes would also remember the lucky whaleman Peleg Nye, who was snatched in the mouth of a harpooned sperm whale and lived to tell the tale, earning him the nickname “the Jonah of Cape Cod.” What was Nye doing as a common seaman on a packet ship in the first place? With his maritime pedigree, he could have had the pick of any cushy shipboard job. For reasons he kept to himself, Thomas Nye signed onboard the John Rutledge out of New York for one of its regular round-trip runs to Liverpool. The sail to England was fast—a 21-day run with favorable winds. By midJanuary, however, word began to reach Liverpool from arriving ships of intense ice in the shipping lanes about 350 miles southeast of Newfoundland. Captain Kelley kept to the schedule. On 16 January the Rutledge headed down the Mersey toward open sea with 150 souls aboard: twenty-six crew, 123 passengers in steerage, and one cabin passenger, a merchant from Philadelphia. The only apparent concession to the risks they faced was Kelley’s appeal to his wife, the former Irene Snow of Falmouth, Massachusetts, to remain behind in Liverpool. The Rutledge was scheduled to return in May, and she could then join her husband and sail back to New York in more pleasant, and presumably safer, weather. More than a month later, on 19 February, the John Rutledge entered heavy fog in the treacherous part of the North Atlantic where the relatively warmer Gulf Stream bumps up against the frigid Labrador Current. Kelley and his crew found the ice thick and menacing—just as had been described in the reports that reached Liverpool before the Rutledge put to sea. The next day, sometime around 9am, an iceberg gouged a huge hole in the packet ship’s bow, just under the waterline. Within hours, it was clear the ship was doomed. Kelley issued the order to abandon ship. All five of the ship’s lifeboats made it off. Nye and twelve others—two crew, the wife of the first mate, and nine steerage passengers, including three children—were the last to cast off, leaving about thirty others, including Atkinson, on the deck to perish. The captain had already departed with a handful of others in boat No. 4.

The lifeboats were soon separated in the fog. Nye’s boat had a gallon of water, about six pounds of hardtack, and a bottle of brandy that the captain had handed to Nye at the last moment. The provisions did not last long. Waves washed into the open boat. Sleet beat down. Then it grew even more ugly. Nye later described being on a lifeboat with “lunatics.” Thirst had driven several of them to drink seawater, and soon began taking its awful toll: delusions, anger, violent mood swings, plus gastrointestinal distress. One man turned on his wife, ripping out her hair in clumps. A crewmember bit into the arm of the wife of the first mate. Some already were dead. The rest would soon follow. Nye knew enough not to drink the water, even as unbearable thirst took hold. The decision likely saved his life. After nine days adrift, he was the only one still alive on Lifeboat No. 5. Four frozen bodies were strewn around him as he was too weak to toss them overboard. Then, Nye saw a smudge on the horizon. It grew larger and began to take shape. Could it be a ship? Nye signaled as best he could, praying the makeshift flags— shirts taken from the dead—would be seen. Someone aboard the Germania, an American packet sailing from France, cried out. Lifeboat spotted, possible survivor. At first, the Germania’s first mate, Charles Hervey Townsend of Connecticut, thought it must be a corpse jostled with the waves. Nye waved weakly. Townsend waved back. Perhaps even more astonishing was that the Germania was there at all. She may have been the last vessel at those latitudes at the time. Most shipping lines, aware of the ice reports, had shifted to a more southerly crossing. “Saw a boat with a man in to windward,” wrote Townsend in his log. Hove ship to. Myself and four men went to his relief. Found him to be one of the boys of the ship John Rutledge bound from Liverpool to New York, which was lost in an immense field of ice… He being the only survivor of 13 souls, having buried with his own hands 8, there being four others having died in the boat. 2 men + 2 women (consigned the dead to the deep). Lat. 44.11, Long. 47.34 Only careful medical attention by the captain’s wife, Sarah Wood of New Bedford, saved Nye’s feet from gangrene and possible amputation. In the end, Nye lost only two toes. “Appalling Catastrophe at Sea,” read the headline in the New York Herald after the Germania reached port on 24 March, and Nye’s story was told far and wide. In 1903, then just a few years shy of 70, Nye recalled to a reporter how he felt a sense of preternatural calm that Leap Day morning on 29 February 1856, just before he saw the Germania. The calm, he believed, was his acceptance of death. “I felt as though the voyage was done,” he said. “Just before noon I sighted a ship advancing from the leeward. I saw her mainsails hove up and the jibs lowered, and then I knew that I was seen and that my deliverance was at hand.” Once the Germania set him on terra firma, he never went back to sea.