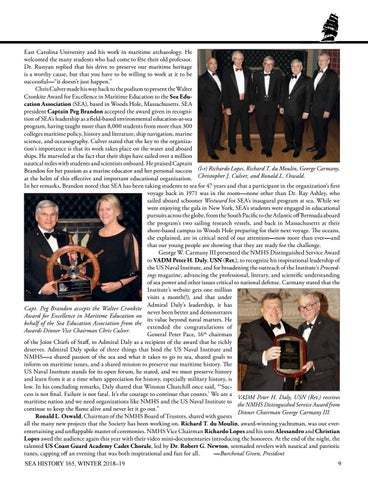 East Carolina University and his work in maritime archaeology. He welcomed the many students who had come to fête their old professor. Dr. Runyan replied that his drive to preserve our maritime heritage is a worthy cause, but that you have to be willing to work at it to be successful—“it doesn’t just happen.” Chris Culver made his way back to the podium to present the Walter Cronkite Award for Excellence in Maritime Education to the Sea Education Association (SEA), based in Woods Hole, Massachusetts. SEA president Captain Peg Brandon accepted the award given in recognition of SEA’s leadership as a field-based environmental education-at-sea program, having taught more than 8,000 students from more than 300 colleges maritime policy, history and literature, ship navigation, marine science, and oceanography. Culver stated that the key to the organization’s importance is that its work takes place on the water and aboard ships. He marveled at the fact that their ships have sailed over a million nautical miles with students and scientists onboard. He praised Captain Brandon for her passion as a marine educator and her personal success (l-r) Richardo Lopes, Richard T. du Moulin, George Carmany, at the helm of this effective and important educational organization. Christopher J. Culver, and Ronald L. Oswald. In her remarks, Brandon noted that SEA has been taking students to sea for 47 years and that a participant in the organization’s first voyage back in 1971 was in the room—none other than Dr. Ray Ashley, who sailed aboard schooner Westward for SEA’s inaugural program at sea. While we were enjoying the gala in New York, SEA’s students were engaged in educational pursuits across the globe, from the South Pacific to the Atlantic off Bermuda aboard the program’s two sailing research vessels, and back in Massachusetts at their shore-based campus in Woods Hole preparing for their next voyage. The oceans, she explained, are in critical need of our attention—now more than ever—and that our young people are showing that they are ready for the challenge. George W. Carmany III presented the NMHS Distinguished Service Award to VADM Peter H. Daly, USN (Ret.), to recognize his inspirational leadership of the US Naval Institute, and for broadening the outreach of the Institute’s Proceedings magazine, advancing the professional, literary, and scientific understanding of sea power and other issues critical to national defense. Carmany stated that the Institute’s website gets one million visits a month(!), and that under Admiral Daly’s leadership, it has Capt. Peg Brandon accepts the Walter Cronkite never been better and demonstrates Award for Excellence in Maritime Education on its value beyond naval matters. He behalf of the Sea Education Association from the extended the congratulations of Awards Dinner Vice Chairman Chris Culver. General Peter Pace, 16th chairman of the Joint Chiefs of Staff, to Admiral Daly as a recipient of the award that he richly deserves. Admiral Daly spoke of three things that bind the US Naval Institute and NMHS—a shared passion of the sea and what it takes to go to sea, shared goals to inform on maritime issues, and a shared mission to preserve our maritime history. The US Naval Institute stands for its open forum, he stated, and we must preserve history and learn from it at a time when appreciation for history, especially military history, is low. In his concluding remarks, Daly shared that Winston Churchill once said, “‘Success is not final. Failure is not fatal. It’s the courage to continue that counts.’ We are a VADM Peter H. Daly, USN (Ret.) receives maritime nation and we need organizations like NMHS and the US Naval Institute to the NMHS Distinguished Service Award from continue to keep the flame alive and never let it go out.” Dinner Chairman George Carmany III. Ronald L. Oswald, Chairman of the NMHS Board of Trustees, shared with guests all the many new projects that the Society has been working on. Richard T. du Moulin, award-winning yachtsman, was our everentertaining and unflappable master of ceremonies. NMHS Vice Chairman Richardo Lopes and his sons Alessandro and Christian Lopes awed the audience again this year with their video mini-documentaries introducing the honorees. At the end of the night, the talented US Coast Guard Academy Cadet Chorale, led by Dr. Robert G. Newton, serenaded revelers with nautical and patriotic tunes, capping off an evening that was both inspirational and fun for all. —Burchenal Green, President SEA HISTORY 165, WINTER 2018–19 9