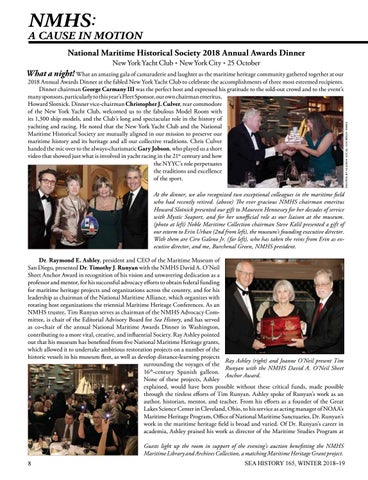 A CAUSE IN MOTION National Maritime Historical Society 2018 Annual Awards Dinner New York Yacht Club • New York City • 25 October 2018 Annual Awards Dinner at the fabled New York Yacht Club to celebrate the accomplishments of three most esteemed recipients. Dinner chairman George Carmany III was the perfect host and expressed his gratitude to the sold-out crowd and to the event’s many sponsors, particularly to this year’s Fleet Sponsor, our own chairman emeritus, Howard Slotnick. Dinner vice-chairman Christopher J. Culver, rear commodore of the New York Yacht Club, welcomed us to the fabulous Model Room with its 1,300 ship models, and the Club’s long and spectacular role in the history of yachting and racing. He noted that the New York Yacht Club and the National Maritime Historical Society are mutually aligned in our mission to preserve our maritime history and its heritage and all our collective traditions. Chris Culver handed the mic over to the always-charismatic Gary Jobson, who played us a short video that showed just what is involved in yacht racing in the 21st century and how the NYYC’s role perpetuates the traditions and excellence of the sport.

What a night! What an amazing gala of camaraderie and laughter as the maritime heritage community gathered together at our

At the dinner, we also recognized two exceptional colleagues in the maritime field who had recently retired. (above) The ever gracious NMHS chairman emeritus Howard Slotnick presented our gift to Maureen Hennessey for her decades of service with Mystic Seaport, and for her unofficial role as our liaison at the museum. (photo at left) Noble Maritime Collection chairman Steve Kalil presented a gift of our esteem to Erin Urban (2nd from left), the museum’s founding executive director. With them are Ciro Galeno Jr. (far left), who has taken the reins from Erin as executive director, and me, Burchenal Green, NMHS president. Dr. Raymond E. Ashley, president and CEO of the Maritime Museum of San Diego, presented Dr. Timothy J. Runyan with the NMHS David A. O’Neil Sheet Anchor Award in recognition of his vision and unwavering dedication as a professor and mentor, for his successful advocacy efforts to obtain federal funding for maritime heritage projects and organizations across the country, and for his leadership as chairman of the National Maritime Alliance, which organizes with rotating host organizations the triennial Maritime Heritage Conferences. As an NMHS trustee, Tim Runyan serves as chairman of the NMHS Advocacy Committee, is chair of the Editorial Advisory Board for Sea History, and has served as co-chair of the annual National Maritime Awards Dinner in Washington, contributing to a more vital, creative, and influential Society. Ray Ashley pointed out that his museum has benefited from five National Maritime Heritage grants, which allowed it to undertake ambitious restoration projects on a number of the historic vessels in his museum fleet, as well as develop distance-learning projects Ray Ashley (right) and Joanne O’Neil present Tim surrounding the voyages of the Runyan with the NMHS David A. O’Neil Sheet th 16 -century Spanish galleon. Anchor Award. None of these projects, Ashley explained, would have been possible without these critical funds, made possible through the tireless efforts of Tim Runyan. Ashley spoke of Runyan’s work as an author, historian, mentor, and teacher. From his efforts as a founder of the Great Lakes Science Center in Cleveland, Ohio, to his service as acting manager of NOAA’s Maritime Heritage Program, Office of National Maritime Sanctuaries, Dr. Runyan’s work in the maritime heritage field is broad and varied. Of Dr. Runyan’s career in academia, Ashley praised his work as director of the Maritime Studies Program at Guests light up the room in support of the evening’s auction benefitting the NMHS Maritime Library and Archives Collection, a matching Maritime Heritage Grant project. 8