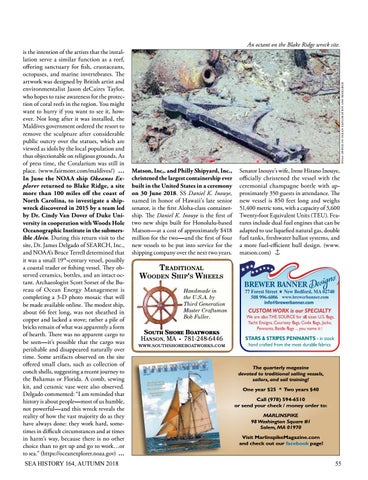 An octant on the Blake Ridge wreck site.

is the intention of the artists that the installation serve a similar function as a reef, offering sanctuary for fish, crustaceans, octopuses, and marine invertebrates. The artwork was designed by British artist and environmentalist Jason deCaires Taylor, who hopes to raise awareness for the protection of coral reefs in the region. You might want to hurry if you want to see it, however. Not long after it was installed, the Maldives government ordered the resort to remove the sculpture after considerable public outcry over the statues, which are viewed as idols by the local population and thus objectionable on religious grounds. As of press time, the Coralarium was still in place. (www.fairmont.com/maldives/) … In June the NOAA ship Okeanos Explorer returned to Blake Ridge, a site more than 100 miles off the coast of North Carolina, to investigate a shipwreck discovered in 2015 by a team led by Dr. Cindy Van Dover of Duke University in cooperation with Woods Hole Oceanographic Institute in the submersible Alvin. During this return visit to the site, Dr. James Delgado of SEARCH, Inc., and NOAA’s Bruce Terrell determined that it was a small 19th-century vessel, possibly a coastal trader or fishing vessel. They observed ceramics, bottles, and an intact octant. Archaeologist Scott Sorset of the Bureau of Ocean Energy Management is completing a 3-D photo mosaic that will be made available online. The modest ship, about 66 feet long, was not sheathed in copper and lacked a stove; rather a pile of bricks remain of what was apparently a form of hearth. There was no apparent cargo to be seen—it’s possible that the cargo was perishable and disappeared naturally over time. Some artifacts observed on the site offered small clues, such as collection of conch shells, suggesting a recent journey to the Bahamas or Florida. A comb, sewing kit, and ceramic vase were also observed. Delgado commented: “I am reminded that history is about people—most of us humble, not powerful—and this wreck reveals the reality of how the vast majority do as they have always done: they work hard, sometimes in difficult circumstances and at times in harm’s way, because there is no other choice than to get up and go to work…or to sea.” (https://oceanexplorer.noaa.gov) …

Matson, Inc,. and Philly Shipyard, Inc., christened the largest containership ever built in the United States in a ceremony on 30 June 2018. SS Daniel K. Inouye, named in honor of Hawaii’s late senior senator, is the first Aloha-class containership. The Daniel K. Inouye is the first of two new ships built for Honolulu-based Matson—at a cost of approximately $418 million for the two—and the first of four new vessels to be put into service for the shipping company over the next two years.