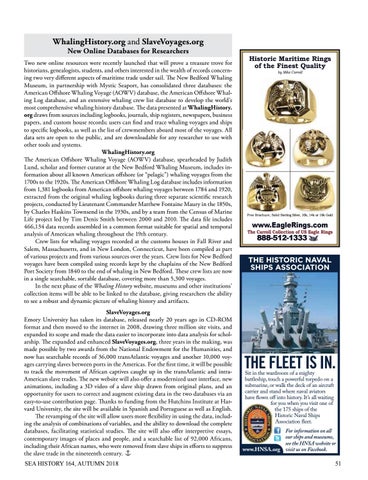 Two new online resources were recently launched that will prove a treasure trove for historians, genealogists, students, and others interested in the wealth of records concerning two very different aspects of maritime trade under sail. The New Bedford Whaling Museum, in partnership with Mystic Seaport, has consolidated three databases: the American Offshore Whaling Voyage (AOWV) database, the American Offshore Whaling Log database, and an extensive whaling crew list database to develop the world’s most comprehensive whaling history database. The data presented at WhalingHistory. org draws from sources including logbooks, journals, ship registers, newspapers, business papers, and custom house records; users can find and trace whaling voyages and ships to specific logbooks, as well as the list of crewmembers aboard most of the voyages. All data sets are open to the public, and are downloadable for any researcher to use with other tools and systems. WhalingHistory.org The American Offshore Whaling Voyage (AOWV) database, spearheaded by Judith Lund, scholar and former curator at the New Bedford Whaling Museum, includes information about all known American offshore (or “pelagic”) whaling voyages from the 1700s to the 1920s. The American Offshore Whaling Log database includes information from 1,381 logbooks from American offshore whaling voyages between 1784 and 1920, extracted from the original whaling logbooks during three separate scientific research projects, conducted by Lieutenant Commander Matthew Fontaine Maury in the 1850s, by Charles Haskins Townsend in the 1930s, and by a team from the Census of Marine Life project led by Tim Denis Smith between 2000 and 2010. The data file includes 466,134 data records assembled in a common format suitable for spatial and temporal analysis of American whaling throughout the 19th century. Crew lists for whaling voyages recorded at the customs houses in Fall River and Salem, Massachusetts, and in New London, Connecticut, have been compiled as part of various projects and from various sources over the years. Crew lists for New Bedford voyages have been compiled using records kept by the chaplains of the New Bedford Port Society from 1840 to the end of whaling in New Bedford. These crew lists are now in a single searchable, sortable database, covering more than 5,300 voyages. In the next phase of the Whaling History website, museums and other institutions’ collection items will be able to be linked to the database, giving researchers the ability to see a robust and dynamic picture of whaling history and artifacts. SlaveVoyages.org Emory University has taken its database, released nearly 20 years ago in CD-ROM format and then moved to the internet in 2008, drawing three million site visits, and expanded its scope and made the data easier to incorporate into data analysis for scholarship. The expanded and enhanced SlaveVoyages.org, three years in the making, was made possible by two awards from the National Endowment for the Humanities, and now has searchable records of 36,000 transAtlantic voyages and another 10,000 voyages carrying slaves between ports in the Americas. For the first time, it will be possible to track the movement of African captives caught up in the transAtlantic and intraAmerican slave trades. The new website will also offer a modernized user interface, new animations, including a 3D video of a slave ship drawn from original plans, and an opportunity for users to correct and augment existing data in the two databases via an easy-to-use contribution page. Thanks to funding from the Hutchins Institute at Harvard University, the site will be available in Spanish and Portuguese as well as English. The revamping of the site will allow users more flexibility in using the data, including the analysis of combinations of variables, and the ability to download the complete databases, facilitating statistical studies. The site will also offer interpretive essays, contemporary images of places and people, and a searchable list of 92,000 Africans, including their African names, who were removed from slave ships in efforts to suppress the slave trade in the nineteenth century.

Historic Maritime Rings of the Finest Quality by Mike Carroll