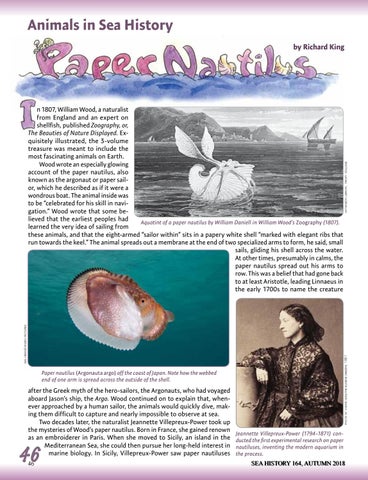 Paper nautilus (Argonauta argo) off the coast of Japan. Note how the webbed end of one arm is spread across the outside of the shell.

after the Greek myth of the hero-sailors, the Argonauts, who had voyaged aboard Jason’s ship, the Argo. Wood continued on to explain that, whenever approached by a human sailor, the animals would quickly dive, making them difficult to capture and nearly impossible to observe at sea. Two decades later, the naturalist Jeannette Villepreux-Power took up the mysteries of Wood’s paper nautilus. Born in France, she gained renown as an embroiderer in Paris. When she moved to Sicily, an island in the Mediterranean Sea, she could then pursue her long-held interest in marine biology. In Sicily, Villepreux-Power saw paper nautiluses

n 1807, William Wood, a naturalist from England and an expert on shellfish, published Zoography, or, The Beauties of Nature Displayed. Exquisitely illustrated, the 3-volume treasure was meant to include the most fascinating animals on Earth. Wood wrote an especially glowing account of the paper nautilus, also known as the argonaut or paper sailor, which he described as if it were a wondrous boat. The animal inside was to be “celebrated for his skill in navigation.” Wood wrote that some believed that the earliest peoples had Aquatint of a paper nautilus by William Daniell in William Wood’s Zoography (1807). learned the very idea of sailing from these animals, and that the eight-armed “sailor within” sits in a papery white shell “marked with elegant ribs that run towards the keel.” The animal spreads out a membrane at the end of two specialized arms to form, he said, small sails, gliding his shell across the water. At other times, presumably in calms, the paper nautilus spread out his arms to row. This was a belief that had gone back to at least Aristotle, leading Linnaeus in the early 1700s to name the creature