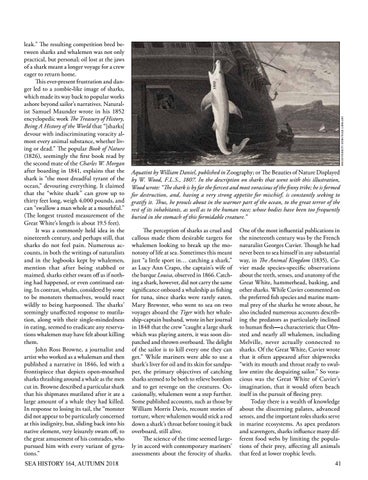 leak.” The resulting competition bred between sharks and whalemen was not only practical, but personal; oil lost at the jaws of a shark meant a longer voyage for a crew eager to return home. This ever-present frustration and danger led to a zombie-like image of sharks, which made its way back to popular works ashore beyond sailor’s narratives. Naturalist Samuel Maunder wrote in his 1852 encyclopedic work The Treasury of History, Being A History of the World that “[sharks] devour with indiscriminating voracity almost every animal substance, whether living or dead.” The popular Book of Nature (1826), seemingly the first book read by the second mate of the Charles W. Morgan after boarding in 1841, explains that the shark is “the most dreadful tyrant of the ocean,” devouring everything. It claimed that the “white shark” can grow up to thirty feet long, weigh 4,000 pounds, and can “swallow a man whole at a mouthful.” (The longest trusted measurement of the Great White’s length is about 19.5 feet). It was a commonly held idea in the nineteenth century, and perhaps still, that sharks do not feel pain. Numerous accounts, in both the writings of naturalists and in the logbooks kept by whalemen, mention that after being stabbed or maimed, sharks either swam off as if nothing had happened, or even continued eating. In contrast, whales, considered by some to be monsters themselves, would react wildly to being harpooned. The sharks’ seemingly unaffected response to mutilation, along with their single-mindedness in eating, seemed to eradicate any reservations whalemen may have felt about killing them. John Ross Browne, a journalist and artist who worked as a whaleman and then published a narrative in 1846, led with a frontispiece that depicts open-mouthed sharks thrashing around a whale as the men cut in. Browne described a particular shark that his shipmates mutilated after it ate a large amount of a whale they had killed. In response to losing its tail, the “monster did not appear to be particularly concerned at this indignity, but, sliding back into his native element, very leisurely swam off, to the great amusement of his comrades, who pursued him with every variant of gyrations.”

Aquatint by William Daniel, published in Zoography; or The Beauties of Nature Displayed by W. Wood, F.L.S., 1807. In the description on sharks that went with this illustration, Wood wrote: “The shark is by far the fiercest and most voracious of the finny tribe; he is formed for destruction, and, having a very strong appetite for mischief, is constantly seeking to gratify it. Thus, he prowls about in the warmer part of the ocean, to the great terror of the rest of its inhabitants, as well as to the human race; whose bodies have been too frequently buried in the stomach of this formidable creature.” The perception of sharks as cruel and callous made them desirable targets for whalemen looking to break up the monotony of life at sea. Sometimes this meant just “a little sport in… catching a shark,” as Lucy Ann Crapo, the captain’s wife of the barque Louisa, observed in 1866. Catching a shark, however, did not carry the same significance onboard a whaleship as fishing for tuna, since sharks were rarely eaten. Mary Brewster, who went to sea on two voyages aboard the Tiger with her whaleship-captain husband, wrote in her journal in 1848 that the crew “caught a large shark which was playing astern, it was soon dispatched and thrown overboard. The delight of the sailor is to kill every one they can get.” While mariners were able to use a shark’s liver for oil and its skin for sandpaper, the primary objectives of catching sharks seemed to be both to relieve boredom and to get revenge on the creatures. Occasionally, whalemen went a step further. Some published accounts, such as those by William Morris Davis, recount stories of torture, where whalemen would stick a rod down a shark’s throat before tossing it back overboard, still alive. The science of the time seemed largely in accord with contemporary mariners’ assessments about the ferocity of sharks.

One of the most influential publications in the nineteenth century was by the French naturalist Georges Cuvier. Though he had never been to sea himself in any substantial way, in The Animal Kingdom (1835), Cuvier made species-specific observations about the teeth, senses, and anatomy of the Great White, hammerhead, basking, and other sharks. While Cuvier commented on the preferred fish species and marine mammal prey of the sharks he wrote about, he also included numerous accounts describing the predators as particularly inclined to human flesh—a characteristic that Olmsted and nearly all whalemen, including Melville, never actually connected to sharks. Of the Great White, Cuvier wrote that it often appeared after shipwrecks “with its mouth and throat ready to swallow entire the despairing sailor.” So voracious was the Great White of Cuvier’s imagination, that it would often beach itself in the pursuit of fleeing prey. Today there is a wealth of knowledge about the discerning palates, advanced senses, and the important roles sharks serve in marine ecosystems. As apex predators and scavengers, sharks influence many different food webs by limiting the populations of their prey, affecting all animals that feed at lower trophic levels.