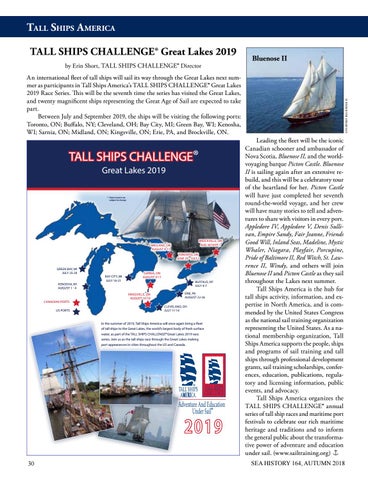 In the summer of 2019, Tall Ships America will once again bring a fleet of tall ships to the Great Lakes, the world’s largest body of fresh surface water, as part of the TALL SHIPS CHALLENGE® Great Lakes 2019 race series. Join us as the tall ships race through the Great Lakes making port appearances in cities throughout the US and Canada.

An international fleet of tall ships will sail its way through the Great Lakes next summer as participants in Tall Ships America’s TALL SHIPS CHALLENGE® Great Lakes 2019 Race Series. This will be the seventh time the series has visited the Great Lakes, and twenty magnificent ships representing the Great Age of Sail are expected to take part. Between July and September 2019, the ships will be visiting the following ports: Toronto, ON; Buffalo, NY; Cleveland, OH; Bay City, MI; Green Bay, WI; Kenosha, WI; Sarnia, ON; Midland, ON; Kingsville, ON; Erie, PA, and Brockville, ON. Leading the fleet will be the iconic Canadian schooner and ambassador of Nova Scotia, Bluenose II, and the worldvoyaging barque Picton Castle. Bluenose II is sailing again after an extensive rebuild, and this will be a celebratory tour of the heartland for her. Picton Castle will have just completed her seventh round-the-world voyage, and her crew will have many stories to tell and adventures to share with visitors in every port. Appledore IV, Appledore V, Denis Sullivan, Empire Sandy, Fair Jeanne, Friends Good Will, Inland Seas, Madeline, Mystic Whaler, Niagara, Playfair, Porcupine, Pride of Baltimore II, Red Witch, St. Lawrence II, Windy, and others will join Bluenose II and Picton Castle as they sail throughout the Lakes next summer. Tall Ships America is the hub for tall ships activity, information, and expertise in North America, and is commended by the United States Congress as the national sail training organization representing the United States. As a national membership organization, Tall Ships America supports the people, ships and programs of sail training and tall ships through professional development grants, sail training scholarships, conferences, education, publications, regulatory and licensing information, public events, and advocacy. Tall Ships America organizes the TALL SHIPS CHALLENGE® annual series of tall ship races and maritime port festivals to celebrate our rich maritime heritage and traditions and to inform the general public about the transformative power of adventure and education under sail. (www.sailtraining.org)