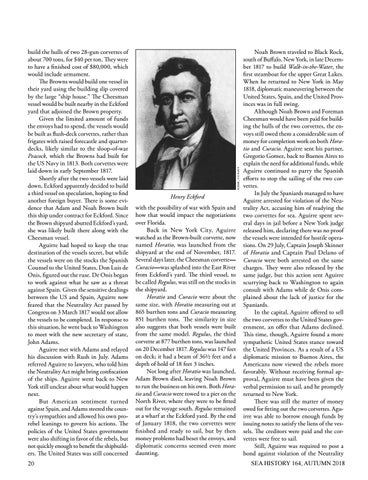 build the hulls of two 28-gun corvettes of about 700 tons, for $40 per ton. They were to have a finished cost of $80,000, which would include armament. The Browns would build one vessel in their yard using the building slip covered by the large “ship house.” The Cheesman vessel would be built nearby in the Eckford yard that adjoined the Brown property. Given the limited amount of funds the envoys had to spend, the vessels would be built as flush-deck corvettes, rather than frigates with raised forecastle and quarterdecks, likely similar to the sloop-of-war Peacock, which the Browns had built for the US Navy in 1813. Both corvettes were laid down in early September 1817. Shortly after the two vessels were laid down, Eckford apparently decided to build a third vessel on speculation, hoping to find another foreign buyer. There is some evidence that Adam and Noah Brown built this ship under contract for Eckford. Since the Brown shipyard abutted Eckford’s yard, she was likely built there along with the Cheesman vessel. Aguirre had hoped to keep the true destination of the vessels secret, but while the vessels were on the stocks the Spanish Counsel to the United States, Don Luis de Onis, figured out the ruse. De Onis began to work against what he saw as a threat against Spain. Given the sensitive dealings between the US and Spain, Aguirre now feared that the Neutrality Act passed by Congress on 3 March 1817 would not allow the vessels to be completed. In response to this situation, he went back to Washington to meet with the new secretary of state, John Adams. Aguirre met with Adams and relayed his discussion with Rush in July. Adams referred Aguirre to lawyers, who told him the Neutrality Act might bring confiscation of the ships. Aguirre went back to New York still unclear about what would happen next. But American sentiment turned against Spain, and Adams steered the country’s sympathies and allowed his own prorebel leanings to govern his actions. The policies of the United States government were also shifting in favor of the rebels, but not quickly enough to benefit the shipbuilders. The United States was still concerned

Henry Eckford with the possibility of war with Spain and how that would impact the negotiations over Florida. Back in New York City, Aguirre watched as the Brown-built corvette, now named Horatio, was launched from the shipyard at the end of November, 1817. Several days later, the Cheesman corvette— Curacio—was splashed into the East River from Eckford’s yard. The third vessel, to be called Regulus, was still on the stocks in the shipyard. Horatio and Curacio were about the same size, with Horatio measuring out at 865 burthen tons and Curacio measuring 851 burthen tons. The similarity in size also suggests that both vessels were built from the same model. Regulus, the third corvette at 877 burthen tons, was launched on 20 December 1817. Regulus was 147 feet on deck; it had a beam of 36½ feet and a depth of hold of 18 feet 3 inches. Not long after Horatio was launched, Adam Brown died, leaving Noah Brown to run the business on his own. Both Horatio and Curacio were towed to a pier on the North River, where they were to be fitted out for the voyage south. Regulus remained at a wharf at the Eckford yard. By the end of January 1818, the two corvettes were finished and ready to sail, but by then money problems had beset the envoys, and diplomatic concerns seemed even more daunting.

Noah Brown traveled to Black Rock, south of Buffalo, New York, in late December 1817 to build Walk-in-the-Water, the first steamboat for the upper Great Lakes. When he returned to New York in May 1818, diplomatic maneuvering between the United States, Spain, and the United Provinces was in full swing. Although Noah Brown and Foreman Cheesman would have been paid for building the hulls of the two corvettes, the envoys still owed them a considerable sum of money for completion work on both Horatio and Curacio. Aguirre sent his partner, Gregorio Gomez, back to Buenos Aires to explain the need for additional funds, while Aguirre continued to parry the Spanish efforts to stop the sailing of the two corvettes. In July the Spaniards managed to have Aguirre arrested for violation of the Neutrality Act, accusing him of readying the two corvettes for sea. Aguirre spent several days in jail before a New York judge released him, declaring there was no proof the vessels were intended for hostile operations. On 29 July, Captain Joseph Skinner of Horatio and Captain Paul Delano of Curacio were both arrested on the same charges. They were also released by the same judge, but this action sent Aguirre scurrying back to Washington to again consult with Adams while de Onis complained about the lack of justice for the Spaniards. In the capital, Aguirre offered to sell the two corvettes to the United States government, an offer that Adams declined. This time, though, Aguirre found a more sympathetic United States stance toward the United Provinces. As a result of a US diplomatic mission to Buenos Aires, the Americans now viewed the rebels more favorably. Without receiving formal approval, Aguirre must have been given the verbal permission to sail, and he promptly returned to New York. There was still the matter of money owed for fitting out the two corvettes. Aguirre was able to borrow enough funds by issuing notes to satisfy the liens of the vessels. The creditors were paid and the corvettes were free to sail. Still, Aguirre was required to post a bond against violation of the Neutrality SEA HISTORY 164, AUTUMN 2018