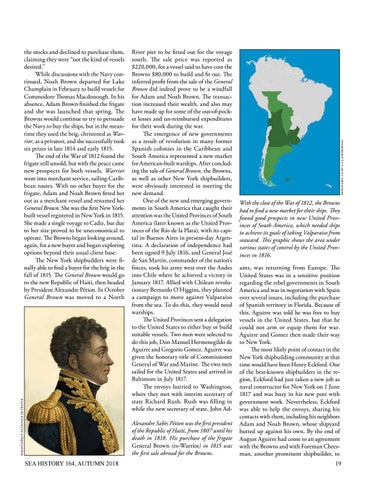 River pier to be fitted out for the voyage south. The sale price was reported as $220,000, for a vessel said to have cost the Browns $80,000 to build and fit out. The inferred profit from the sale of the General Brown did indeed prove to be a windfall for Adam and Noah Brown. The transaction increased their wealth, and also may have made up for some of the out-of-pocket losses and un-reimbursed expenditures for their work during the war. The emergence of new governments as a result of revolution in many former Spanish colonies in the Caribbean and South America represented a new market for American-built warships. After concluding the sale of General Brown, the Browns, as well as other New York shipbuilders, were obviously interested in meeting the new demand. One of the new and emerging governments in South America that caught their attention was the United Provinces of South America (later known as the United Provinces of the Río de la Plata), with its capital in Buenos Aires in present-day Argentina. A declaration of independence had been signed 9 July 1816, and General José de San Martín, commander of the nation’s forces, took his army west over the Andes into Chile where he achieved a victory in January 1817. Allied with Chilean revolutionary Bernardo O’Higgins, they planned a campaign to move against Valparaiso from the sea. To do this, they would need warships. The United Provinces sent a delegation to the United States to either buy or build suitable vessels. Two men were selected to do this job, Don Manuel Hermenegildo de Aguirre and Gregorio Gomez. Aguirre was given the honorary title of Commissioner General of War and Marine. The two men sailed for the United States and arrived in Baltimore in July 1817. The envoys hurried to Washington, where they met with interim secretary of state Richard Rush. Rush was filling in while the new secretary of state, John AdAlexandre Sabès Pétion was the first president of the Republic of Haiti, from 1807 until his death in 1818. His purchase of the frigate General Brown (ex-Warrior) in 1815 was the first sale abroad for the Browns.

the stocks and declined to purchase them, claiming they were “not the kind of vessels desired.” While discussions with the Navy continued, Noah Brown departed for Lake Champlain in February to build vessels for Commodore Thomas Macdonough. In his absence, Adam Brown finished the frigate and she was launched that spring. The Browns would continue to try to persuade the Navy to buy the ships, but in the meantime they used the brig, christened as Warrior, as a privateer, and she successfully took six prizes in late 1814 and early 1815. The end of the War of 1812 found the frigate still unsold, but with the peace came new prospects for both vessels. Warrior went into merchant service, sailing Caribbean routes. With no other buyer for the frigate, Adam and Noah Brown fitted her out as a merchant vessel and renamed her General Brown. She was the first New Yorkbuilt vessel registered in New York in 1815. She made a single voyage to Cadiz, but due to her size proved to be uneconomical to operate. The Browns began looking around, again, for a new buyer and began exploring options beyond their usual client base. The New York shipbuilders were finally able to find a buyer for the brig in the fall of 1815. The General Brown would go to the new Republic of Haiti, then headed by President Alexandre Pétion. In October General Brown was moved to a North

With the close of the War of 1812, the Browns had to find a new market for their ships. They found good prospects in new United Provinces of South America, which needed ships to achieve its goals of taking Valparaiso from seaward. This graphic shows the area under various states of control by the United Provinces in 1816. ams, was returning from Europe. The United States was in a sensitive position regarding the rebel governments in South America and was in negotiation with Spain over several issues, including the purchase of Spanish territory in Florida. Because of this, Aguirre was told he was free to buy vessels in the United States, but that he could not arm or equip them for war. Aguirre and Gomez then made their way to New York. The most likely point of contact in the New York shipbuilding community at that time would have been Henry Eckford. One of the best-known shipbuilders in the region, Eckford had just taken a new job as naval constructor for New York on 1 June 1817 and was busy in his new post with government work. Nevertheless, Eckford was able to help the envoys, sharing his contacts with them, including his neighbors Adam and Noah Brown, whose shipyard butted up against his own. By the end of August Aguirre had come to an agreement with the Browns and with Foreman Cheesman, another prominent shipbuilder, to