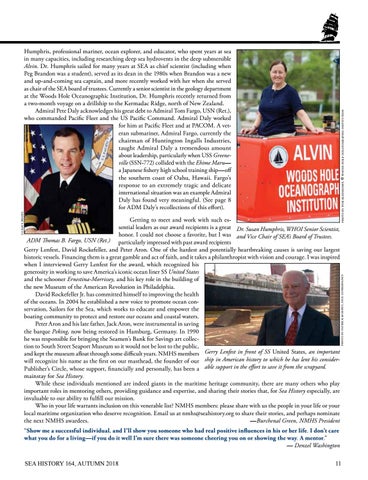 Getting to meet and work with such essential leaders as our award recipients is a great Dr. Susan Humphris, WHOI Senior Scientist, honor. I could not choose a favorite, but I was and Vice Chair of SEA’s Board of Trustees. ADM Thomas B. Fargo, USN (Ret.) particularly impressed with past award recipients Gerry Lenfest, David Rockefeller, and Peter Aron. One of the hardest and potentially heartbreaking causes is saving our largest historic vessels. Financing them is a great gamble and act of faith, and it takes a philanthropist with vision and courage. I was inspired when I interviewed Gerry Lenfest for the award, which recognized his generosity in working to save America’s iconic ocean liner SS United States and the schooner Ernestina-Morrissey, and his key role in the building of the new Museum of the American Revolution in Philadelphia. David Rockefeller Jr. has committed himself to improving the health of the oceans. In 2004 he established a new voice to promote ocean conservation, Sailors for the Sea, which works to educate and empower the boating community to protect and restore our oceans and coastal waters. Peter Aron and his late father, Jack Aron, were instrumental in saving the barque Peking, now being restored in Hamburg, Germany. In 1990 he was responsible for bringing the Seamen’s Bank for Savings art collection to South Street Seaport Museum so it would not be lost to the public, and kept the museum afloat through some difficult years. NMHS members Gerry Lenfest in front of SS United States, an important will recognize his name as the first on our masthead, the founder of our ship in American history to which he has lent his considerPublisher’s Circle, whose support, financially and personally, has been a able support in the effort to save it from the scrapyard. mainstay for Sea History. While these individuals mentioned are indeed giants in the maritime heritage community, there are many others who play important roles in mentoring others, providing guidance and expertise, and sharing their stories that, for Sea History especially, are invaluable to our ability to fulfill our mission. Who in your life warrants inclusion on this venerable list? NMHS members: please share with us the people in your life or your local maritime organization who deserve recognition. Email us at nmhs@seahistory.org to share their stories, and perhaps nominate the next NMHS awardees. —Burchenal Green, NMHS President

Humphris, professional mariner, ocean explorer, and educator, who spent years at sea in many capacities, including researching deep sea hydrovents in the deep submersible Alvin. Dr. Humphris sailed for many years at SEA as chief scientist (including when Peg Brandon was a student), served as its dean in the 1980s when Brandon was a new and up-and-coming sea captain, and more recently worked with her when she served as chair of the SEA board of trustees. Currently a senior scientist in the geology department at the Woods Hole Oceanographic Institution, Dr. Humphris recently returned from a two-month voyage on a drillship to the Kermadac Ridge, north of New Zealand. Admiral Pete Daly acknowledges his great debt to Admiral Tom Fargo, USN (Ret.), who commanded Pacific Fleet and the US Pacific Command. Admiral Daly worked for him at Pacific Fleet and at PACOM. A veteran submariner, Admiral Fargo, currently the chairman of Huntington Ingalls Industries, taught Admiral Daly a tremendous amount about leadership, particularly when USS Greeneville (SSN-772) collided with the Ehime Maru— a Japanese fishery high school training ship—off the southern coast of Oahu, Hawaii. Fargo’s response to an extremely tragic and delicate international situation was an example Admiral Daly has found very meaningful. (See page 8 for ADM Daly’s recollections of this effort).

“Show me a successful individual, and I’ll show you someone who had real positive influences in his or her life. I don’t care what you do for a living—if you do it well I’m sure there was someone cheering you on or showing the way. A mentor.” — Denzel Washington SEA HISTORY 164, AUTUMN 2018 11