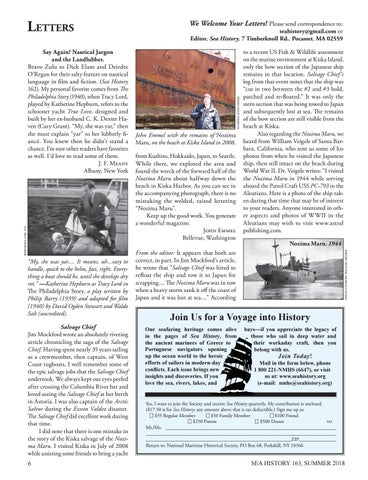 “My, she was yar.... It means, uh...easy to handle, quick to the helm, fast, right. Everything a boat should be, until she develops dry rot.” —Katherine Hepburn as Tracy Lord in The Philadelphia Story, a play written by Philip Barry (1939) and adapted for film (1940) by David Ogden Stewart and Waldo Salt (uncredited). Salvage Chief Jim Mockford wrote an absolutely riveting article chronicling the saga of the Salvage Chief. Having spent nearly 35 years sailing as a crewmember, then captain, of West Coast tugboats, I well remember some of the epic salvage jobs that the Salvage Chief undertook. We always kept our eyes peeled after crossing the Columbia River bar and loved seeing the Salvage Chief at her berth in Astoria. I was also captain of the Arctic Salvor during the Exxon Valdez disaster. The Salvage Chief did excellent work during that time. I did note that there is one mistake in the story of the Kiska salvage of the Nozima Maru. I visited Kiska in July of 2008 while assisting some friends to bring a yacht 6

John Emmel with the remains of Nozima Maru, on the beach at Kiska Island in 2008. from Kushiro, Hokkaido, Japan, to Seattle. While there, we explored the area and found the wreck of the forward half of the Nozima Maru about halfway down the beach in Kiska Harbor. As you can see in the accompanying photograph, there is no mistaking the welded, raised lettering “Nozima Maru”. Keep up the good work. You generate a wonderful magazine. John Emmel Bellevue, Washington

to a recent US Fish &amp; Wildlife assessment on the marine environment at Kiska Island, only the bow section of the Japanese ship remains in that location. Salvage Chief ’s log from that event notes that the ship was “cut in two between the #2 and #3 hold, patched and re-floated.” It was only the stern section that was being towed to Japan and subsequently lost at sea. The remains of the bow section are still visible from the beach at Kiska. Also regarding the Nozima Maru, we heard from William Veigele of Santa Barbara, California, who sent us some of his photos from when he visited the Japanese ship, then still intact on the beach during World War II. Dr. Veigele writes: “I visited the Nozima Maru in 1944 while serving aboard the Patrol Craft USS PC-793 in the Aleutians. Here is a photo of the ship taken during that time that may be of interest to your readers. Anyone interested in other aspects and photos of WWII in the Aleutians may wish to visit www.astral publishing.com. Nozima Maru, 1944

From the editor: It appears that both are correct, in part. In Jim Mockford’s article, he wrote that “Salvage Chief was hired to refloat the ship and tow it to Japan for scrapping.... The Nozima Maru was in tow when a heavy storm sank it off the coast of Japan and it was lost at sea....” According

Say Again? Nautical Jargon and the Landlubber. Bravo Zulu to Dick Elam and Deirdre O’Regan for their salty feature on nautical language in film and fiction. (Sea History 162). My personal favorite comes from The Philadelphia Story (1940), when Tracy Lord, played by Katherine Hepburn, refers to the schooner yacht True Love, designed and built by her ex-husband C. K. Dexter Haven (Cary Grant). “My, she was yar,” then she must explain “yar” to her lubberly fiancé. You knew then he didn’t stand a chance. I’m sure other readers have favorites as well. I’d love to read some of them. J. F. Meany Albany, New York