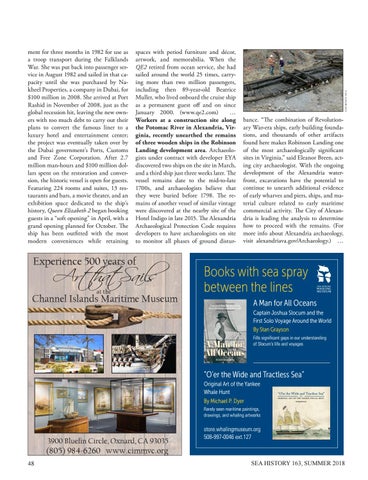 spaces with period furniture and décor, artwork, and memorabilia. When the QE2 retired from ocean service, she had sailed around the world 25 times, carrying more than two million passengers, including then 89-year-old Beatrice Muller, who lived onboard the cruise ship as a permanent guest off and on since January 2000. (www.qe2.com) … Workers at a construction site along the Potomac River in Alexandria, Virginia, recently unearthed the remains of three wooden ships in the Robinson Landing development area. Archaeologists under contract with developer EYA discovered two ships on the site in March, and a third ship just three weeks later. The vessel remains date to the mid-to-late 1700s, and archaeologists believe that they were buried before 1798. The remains of another vessel of similar vintage were discovered at the nearby site of the Hotel Indigo in late 2015. The Alexandria Archaeological Protection Code requires developers to have archaeologists on site to monitor all phases of ground distur-

Art that Sails at the

ment for three months in 1982 for use as a troop transport during the Falklands War. She was put back into passenger service in August 1982 and sailed in that capacity until she was purchased by Nakheel Properties, a company in Dubai, for $100 million in 2008. She arrived at Port Rashid in November of 2008, just as the global recession hit, leaving the new owners with too much debt to carry out their plans to convert the famous liner to a luxury hotel and entertainment center; the project was eventually taken over by the Dubai government’s Ports, Customs and Free Zone Corporation. After 2.7 million man-hours and $100 million dollars spent on the restoration and conversion, the historic vessel is open for guests. Featuring 224 rooms and suites, 13 restaurants and bars, a movie theater, and an exhibition space dedicated to the ship’s history, Queen Elizabeth 2 began booking guests in a “soft opening” in April, with a grand opening planned for October. The ship has been outfitted with the most modern conveniences while retaining

bance. “The combination of Revolutionary War-era ships, early building foundations, and thousands of other artifacts found here makes Robinson Landing one of the most archaeologically significant sites in Virginia,” said Eleanor Breen, acting city archaeologist. With the ongoing development of the Alexandria waterfront, excavations have the potential to continue to unearth additional evidence of early wharves and piers, ships, and material culture related to early maritime commercial activity. The City of Alexandria is leading the analysis to determine how to proceed with the remains. (For more info about Alexandria archaeology, visit alexandriava.gov/Archaeology.) …

Captain Joshua Slocum and the first solo voyage around the world

A Man for All Oceans STAN GRAYSON

“O’er the Wide and Tractless Sea”