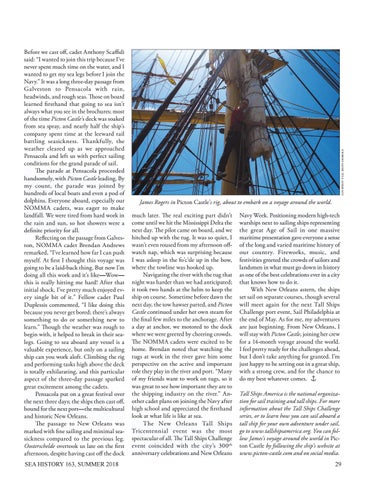 Before we cast off, cadet Anthony Scaffidi said: “I wanted to join this trip because I’ve never spent much time on the water, and I wanted to get my sea legs before I join the Navy.” It was a long three-day passage from Galveston to Pensacola with rain, headwinds, and rough seas. Those on board learned firsthand that going to sea isn’t always what you see in the brochures; most of the time Picton Castle’s deck was soaked from sea spray, and nearly half the ship’s company spent time at the leeward rail battling seasickness. Thankfully, the weather cleared up as we approached Pensacola and left us with perfect sailing conditions for the grand parade of sail. The parade at Pensacola proceeded handsomely, with Picton Castle leading. By my count, the parade was joined by hundreds of local boats and even a pod of dolphins. Everyone aboard, especially our NOMMA cadets, was eager to make landfall. We were tired from hard work in the rain and sun, so hot showers were a definite priority for all. Reflecting on the passage from Galveston, NOMMA cadet Brendan Andrews remarked, “I’ve learned how far I can push myself. At first I thought this voyage was going to be a laid-back thing. But now I’m doing all this work and it’s like—Wow— this is really hitting me hard! After that initial shock, I’ve pretty much enjoyed every single bit of it.” Fellow cadet Paul Duplessis commented, “I like doing this because you never get bored; there’s always something to do or something new to learn.” Though the weather was rough to begin with, it helped to break in their sealegs. Going to sea aboard any vessel is a valuable experience, but only on a sailing ship can you work aloft. Climbing the rig and performing tasks high above the deck is totally exhilarating, and this particular aspect of the three-day passage sparked great excitement among the cadets. Pensacola put on a great festival over the next three days; the ships then cast off, bound for the next port—the multicultural and historic New Orleans. The passage to New Orleans was marked with fine sailing and minimal seasickness compared to the previous leg. Oosterschelde overtook us late on the first afternoon, despite having cast off the dock

James Rogers in Picton Castle’s rig, about to embark on a voyage around the world. much later. The real exciting part didn’t come until we hit the Mississippi Delta the next day. The pilot came on board, and we hitched up with the tug. It was so quiet, I wasn’t even roused from my afternoon offwatch nap, which was surprising because I was asleep in the fo’c’sle up in the bow, where the towline was hooked up. Navigating the river with the tug that night was harder than we had anticipated; it took two hands at the helm to keep the ship on course. Sometime before dawn the next day, the tow hawser parted, and Picton Castle continued under her own steam for the final few miles to the anchorage. After a day at anchor, we motored to the dock where we were greeted by cheering crowds. The NOMMA cadets were excited to be home. Brendan noted that watching the tugs at work in the river gave him some perspective on the active and important role they play in the river and port. “Many of my friends want to work on tugs, so it was great to see how important they are to the shipping industry on the river.” Another cadet plans on joining the Navy after high school and appreciated the firsthand look at what life is like at sea. The New Orleans Tall Ships Tricentennial event was the most spectacular of all. The Tall Ships Challenge event coincided with the city’s 300th anniversary celebrations and New Orleans

Navy Week. Positioning modern high-tech warships next to sailing ships representing the great Age of Sail in one massive maritime presentation gave everyone a sense of the long and varied maritime history of our country. Fireworks, music, and festivities greeted the crowds of sailors and landsmen in what must go down in history as one of the best celebrations ever in a city that knows how to do it. With New Orleans astern, the ships set sail on separate courses, though several will meet again for the next Tall Ships Challenge port event, Sail Philadelphia at the end of May. As for me, my adventures are just beginning. From New Orleans, I will stay with Picton Castle, joining her crew for a 14-month voyage around the world. I feel pretty ready for the challenges ahead, but I don’t take anything for granted. I’m just happy to be setting out in a great ship, with a strong crew, and for the chance to do my best whatever comes. Tall Ships America is the national organization for sail training and tall ships. For more information about the Tall Ships Challenge series, or to learn how you can sail aboard a tall ship for your own adventure under sail, go to www.tallshipsamerica.org. You can follow James’s voyage around the world in Picton Castle by following the ship’s website at www.picton-castle.com and on social media.