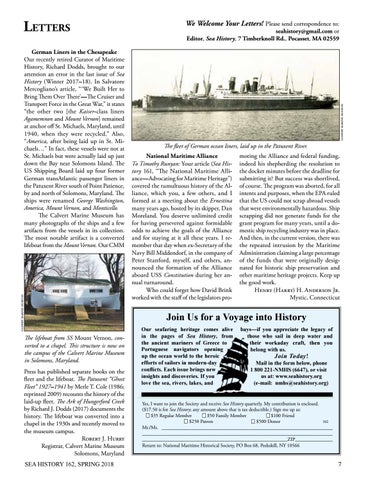 German Liners in the Chesapeake Our recently retired Curator of Maritime History, Richard Dodds, brought to our attention an error in the last issue of Sea History (Winter 2017–18). In Salvatore Mercogliano’s article, “ ‘We Built Her to Bring Them Over There’—The Cruiser and Transport Force in the Great War,” it states “the other two [the Kaiser-class liners Agamemnon and Mount Vernon] remained at anchor off St. Michaels, Maryland, until 1940, when they were recycled.” Also, “America, after being laid up in St. Michaels…” In fact, these vessels were not at St. Michaels but were actually laid up just down the Bay near Solomons Island. The US Shipping Board laid up four former German transAtlantic passenger liners in the Patuxent River south of Point Patience, by and north of Solomons, Maryland. The ships were renamed George Washington, America, Mount Vernon, and Monticello. The Calvert Marine Museum has many photographs of the ships and a few artifacts from the vessels in its collection. The most notable artifact is a converted lifeboat from the Mount Vernon. Our CMM

The fleet of German ocean liners, laid up in the Patuxent River. National Maritime Alliance To Timothy Runyan: Your article (Sea History 161, “The National Maritime Alliance—Advocating for Maritime Heritage”) covered the tumultuous history of the Alliance, which you, a few others, and I formed at a meeting about the Ernestina many years ago, hosted by its skipper, Dan Moreland. You deserve unlimited credit for having persevered against formidable odds to achieve the goals of the Alliance and for staying at it all these years. I remember that day when ex-Secretary of the Navy Bill Middendorf, in the company of Peter Stanford, myself, and others, announced the formation of the Alliance aboard USS Constitution during her annual turnaround. Who could forget how David Brink worked with the staff of the legislators pro-

moting the Alliance and federal funding, indeed his shepherding the resolution to the docket minutes before the deadline for submitting it? But success was shortlived, of course. The program was aborted, for all intents and purposes, when the EPA ruled that the US could not scrap abroad vessels that were environmentally hazardous. Ship scrapping did not generate funds for the grant program for many years, until a domestic ship recycling industry was in place. And then, in the current version, there was the repeated intrusion by the Maritime Administration claiming a large percentage of the funds that were originally designated for historic ship preservation and other maritime heritage projects. Keep up the good work. Henry (Harry) H. Anderson Jr. Mystic, Connecticut

Join Us for a Voyage into History The lifeboat from SS Mount Vernon, converted to a chapel. This structure is now on the campus of the Calvert Marine Museum in Solomons, Maryland.

Press has published separate books on the fleet and the lifeboat. The Patuxent “Ghost Fleet” 1927–1941 by Merle T. Cole (1986; reprinted 2009) recounts the history of the laid-up fleet. The Ark of Hungerford Creek by Richard J. Dodds (2017) documents the history. The lifeboat was converted into a chapel in the 1930s and recently moved to the museum campus. Robert J. Hurry Registrar, Calvert Marine Museum Solomons, Maryland