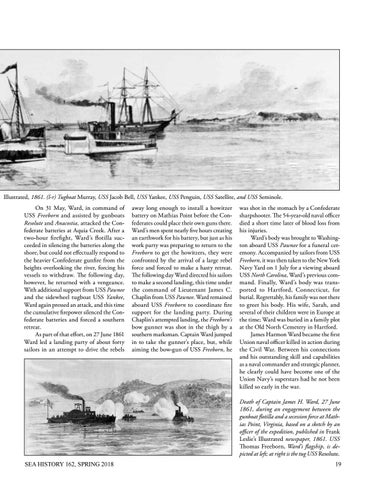 Illustrated, 1861. (l-r) Tugboat Murray, USS Jacob Bell, USS Yankee, USS Penguin, USS Satellite, and USS Seminole. On 31 May, Ward, in command of USS Freeborn and assisted by gunboats Resolute and Anacostia, attacked the Confederate batteries at Aquia Creek. After a two-hour firefight, Ward’s flotilla succeeded in silencing the batteries along the shore, but could not effectually respond to the heavier Confederate gunfire from the heights overlooking the river, forcing his vessels to withdraw. The following day, however, he returned with a vengeance. With additional support from USS Pawnee and the sidewheel tugboat USS Yankee, Ward again pressed an attack, and this time the cumulative firepower silenced the Confederate batteries and forced a southern retreat. As part of that effort, on 27 June 1861 Ward led a landing party of about forty sailors in an attempt to drive the rebels

away long enough to install a howitzer battery on Mathias Point before the Confederates could place their own guns there. Ward’s men spent nearly five hours creating an earthwork for his battery, but just as his work party was preparing to return to the Freeborn to get the howitzers, they were confronted by the arrival of a large rebel force and forced to make a hasty retreat. The following day Ward directed his sailors to make a second landing, this time under the command of Lieutenant James C. Chaplin from USS Pawnee. Ward remained aboard USS Freeborn to coordinate fire support for the landing party. During Chaplin’s attempted landing, the Freeborn’s bow gunner was shot in the thigh by a southern marksman. Captain Ward jumped in to take the gunner’s place, but, while aiming the bow-gun of USS Freeborn, he

was shot in the stomach by a Confederate sharpshooter. The 54-year-old naval officer died a short time later of blood loss from his injuries. Ward’s body was brought to Washington aboard USS Pawnee for a funeral ceremony. Accompanied by sailors from USS Freeborn, it was then taken to the New York Navy Yard on 1 July for a viewing aboard USS North Carolina, Ward’s previous command. Finally, Ward’s body was transported to Hartford, Connecticut, for burial. Regrettably, his family was not there to greet his body. His wife, Sarah, and several of their children were in Europe at the time; Ward was buried in a family plot at the Old North Cemetery in Hartford. James Harmon Ward became the first Union naval officer killed in action during the Civil War. Between his connections and his outstanding skill and capabilities as a naval commander and strategic planner, he clearly could have become one of the Union Navy’s superstars had he not been killed so early in the war. Death of Captain James H. Ward, 27 June 1861, during an engagement between the gunboat flotilla and a secession force at Mathias Point, Virginia, based on a sketch by an officer of the expedition, published in Frank Leslie’s Illustrated newspaper, 1861. USS Thomas Freeborn, Ward’s flagship, is depicted at left; at right is the tug USS Resolute.