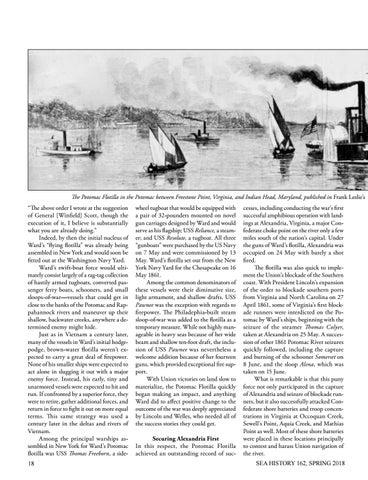 The Potomac Flotilla in the Potomac between Freestone Point, Virginia, and Indian Head, Maryland, published in Frank Leslie’s “The above order I wrote at the suggestion of General [Winfield] Scott, though the execution of it, I believe is substantially what you are already doing.” Indeed, by then the initial nucleus of Ward’s “flying flotilla” was already being assembled in New York and would soon be fitted out at the Washington Navy Yard. Ward’s swift-boat force would ultimately consist largely of a rag-tag collection of hastily armed tugboats, converted passenger ferry boats, schooners, and small sloops-of-war—vessels that could get in close to the banks of the Potomac and Rappahannock rivers and maneuver up their shallow, backwater creeks, anywhere a determined enemy might hide. Just as in Vietnam a century later, many of the vessels in Ward’s initial hodgepodge, brown-water flotilla weren’t expected to carry a great deal of firepower. None of his smaller ships were expected to act alone in slugging it out with a major enemy force. Instead, his early, tiny and unarmored vessels were expected to hit and run. If confronted by a superior force, they were to retire, gather additional forces, and return in force to fight it out on more equal terms. This same strategy was used a century later in the deltas and rivers of Vietnam. Among the principal warships assembled in New York for Ward’s Potomac flotilla was USS Thomas Freeborn, a side18

wheel tugboat that would be equipped with a pair of 32-pounders mounted on novel gun carriages designed by Ward and would serve as his flagship; USS Reliance, a steamer; and USS Resolute, a tugboat. All three “gunboats” were purchased by the US Navy on 7 May and were commissioned by 13 May. Ward’s flotilla set out from the New York Navy Yard for the Chesapeake on 16 May 1861. Among the common denominators of these vessels were their diminutive size, light armament, and shallow drafts. USS Pawnee was the exception with regards to firepower. The Philadephia-built steam sloop-of-war was added to the flotilla as a temporary measure. While not highly manageable in heavy seas because of her wide beam and shallow ten-foot draft, the inclusion of USS Pawnee was nevertheless a welcome addition because of her fourteen guns, which provided exceptional fire support. With Union victories on land slow to materialize, the Potomac Flotilla quickly began making an impact, and anything Ward did to affect positive change to the outcome of the war was deeply appreciated by Lincoln and Welles, who needed all of the success stories they could get. Securing Alexandria First In this respect, the Potomac Flotilla achieved an outstanding record of suc-

cesses, including conducting the war’s first successful amphibious operation with landings at Alexandria, Virginia, a major Confederate choke point on the river only a few miles south of the nation’s capital. Under the guns of Ward’s flotilla, Alexandria was occupied on 24 May with barely a shot fired. The flotilla was also quick to implement the Union’s blockade of the Southern coast. With President Lincoln’s expansion of the order to blockade southern ports from Virginia and North Carolina on 27 April 1861, some of Virginia’s first blockade runners were interdicted on the Potomac by Ward’s ships, beginning with the seizure of the steamer Thomas Colyer, taken at Alexandria on 25 May. A succession of other 1861 Potomac River seizures quickly followed, including the capture and burning of the schooner Somerset on 8 June, and the sloop Alena, which was taken on 15 June. What is remarkable is that this puny force not only participated in the capture of Alexandria and seizure of blockade runners, but it also successfully attacked Confederate shore batteries and troop concentrations in Virginia at Occoquan Creek, Sewell’s Point, Aquia Creek, and Mathias Point as well. Most of these shore batteries were placed in these locations principally to contest and harass Union navigation of the river. SEA HISTORY 162, SPRING 2018