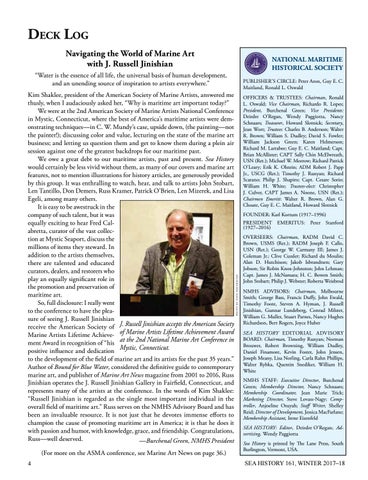 “Water is the essence of all life, the universal basis of human development, and an unending source of inspiration to artists everywhere.”

(For more on the ASMA conference, see Marine Art News on page 36.) 4

Kim Shaklee, president of the American Society of Marine Artists, answered me thusly, when I audaciously asked her, “Why is maritime art important today?” We were at the 2nd American Society of Marine Artists National Conference in Mystic, Connecticut, where the best of America’s maritime artists were demonstrating techniques—in C. W. Mundy’s case, upside down, (the painting—not the painter!); discussing color and value, lecturing on the state of the marine art business; and letting us question them and get to know them during a plein air session against one of the greatest backdrops for our maritime past. We owe a great debt to our maritime artists, past and present. Sea History would certainly be less vivid without them, as many of our covers and marine art features, not to mention illustrations for history articles, are generously provided by this group. It was enthralling to watch, hear, and talk to artists John Stobart, Len Tantillo, Don Demers, Russ Kramer, Patrick O’Brien, Len Mizerek, and Lisa Egeli, among many others. It is easy to be awestruck in the company of such talent, but it was equally exciting to hear Fred Calabretta, curator of the vast collection at Mystic Seaport, discuss the millions of items they steward. In addition to the artists themselves, there are talented and educated curators, dealers, and restorers who play an equally significant role in the promotion and preservation of maritime art. So, full disclosure: I really went to the conference to have the pleasure of seeing J. Russell Jinishian receive the American Society of J. Russell Jinishian accepts the American Society Marine Artists Lifetime Achieve- of Marine Artists Lifetime Achievement Award ment Award in recognition of “his at the 2nd National Marine Art Conference in positive influence and dedication Mystic, Connecticut. to the development of the field of marine art and its artists for the past 35 years.” Author of Bound for Blue Water, considered the definitive guide to contemporary marine art, and publisher of Marine Art News magazine from 2001 to 2016, Russ Jinishian operates the J. Russell Jinishian Gallery in Fairfield, Connecticut, and represents many of the artists at the conference. In the words of Kim Shaklee: “Russell Jinishian is regarded as the single most important individual in the overall field of maritime art.” Russ serves on the NMHS Advisory Board and has been an invaluable resource. It is not just that he devotes immense efforts to champion the cause of promoting maritime art in America; it is that he does it with passion and humor, with knowledge, grace, and friendship. Congratulations, Russ—well deserved. —Burchenal Green, NMHS President