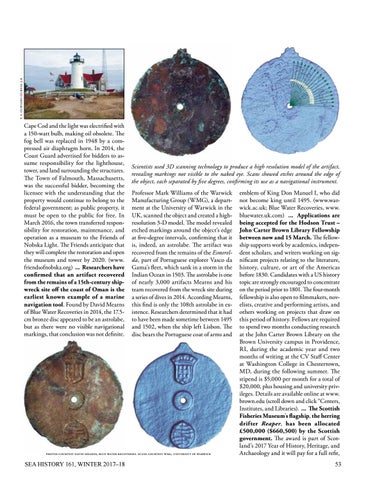 Cape Cod and the light was electrified with a 150-watt bulb, making oil obsolete. The fog bell was replaced in 1948 by a compressed air diaphragm horn. In 2014, the Coast Guard advertised for bidders to assume responsibility for the lighthouse, tower, and land surrounding the structures. The Town of Falmouth, Massachusetts, was the successful bidder, becoming the licensee with the understanding that the property would continue to belong to the federal government; as public property, it must be open to the public for free. In March 2016, the town transferred responsibility for restoration, maintenance, and operation as a museum to the Friends of Nobska Light. The Friends anticipate that they will complete the restoration and open the museum and tower by 2020. (www. friendsofnobska.org) ... Researchers have confirmed that an artifact recovered from the remains of a 15th-century shipwreck site off the coast of Oman is the earliest known example of a marine navigation tool. Found by David Mearns of Blue Water Recoveries in 2014, the 17.5cm bronze disc appeared to be an astrolabe, but as there were no visible navigational markings, that conclusion was not definite.

Scientists used 3D scanning technology to produce a high resolution model of the artifact, revealing markings not visible to the naked eye. Scans showed etches around the edge of the object, each separated by five degrees, confirming its use as a navigational instrument. Professor Mark Williams of the Warwick Manufacturing Group (WMG), a department at the University of Warwick in the UK, scanned the object and created a highresolution 3-D model. The model revealed etched markings around the object’s edge at five-degree intervals, confirming that it is, indeed, an astrolabe. The artifact was recovered from the remains of the Esmerelda, part of Portuguese explorer Vasco da Gama’s fleet, which sank in a storm in the Indian Ocean in 1503. The astrolabe is one of nearly 3,000 artifacts Mearns and his team recovered from the wreck site during a series of dives in 2014. According Mearns, this find is only the 108th astrolabe in existence. Researchers determined that it had to have been made sometime between 1495 and 1502, when the ship left Lisbon. The disc bears the Portuguese coat of arms and

emblem of King Don Manuel I, who did not become king until 1495. (www.warwick.ac.uk; Blue Water Recoveries, www. bluewater.uk.com) ... Applications are being accepted for the Hodson Trust – John Carter Brown Library Fellowship between now and 15 March. The fellowship supports work by academics, independent scholars, and writers working on significant projects relating to the literature, history, culture, or art of the Americas before 1830. Candidates with a US history topic are strongly encouraged to concentrate on the period prior to 1801. The four-month fellowship is also open to filmmakers, novelists, creative and performing artists, and others working on projects that draw on this period of history. Fellows are required to spend two months conducting research at the John Carter Brown Library on the Brown University campus in Providence, RI, during the academic year and two months of writing at the CV Staff Center at Washington College in Chestertown, MD, during the following summer. The stipend is $5,000 per month for a total of $20,000, plus housing and university privileges. Details are available online at www. brown.edu (scroll down and click “Centers, Institutes, and Libraries). ... The Scottish Fisheries Museum’s flagship, the herring drifter Reaper, has been allocated £500,000 ($660,500) by the Scottish government. The award is part of Scotland’s 2017 Year of History, Heritage, and Archaeology and it will pay for a full refit,