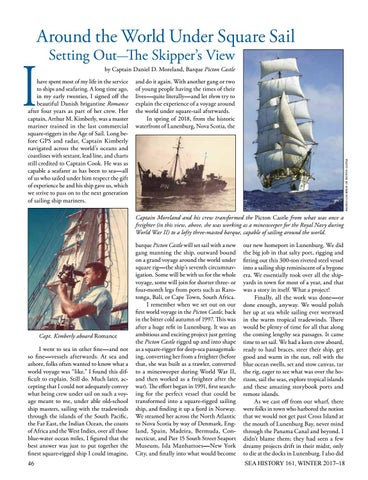 have spent most of my life in the service to ships and seafaring. A long time ago, in my early twenties, I signed off the beautiful Danish brigantine Romance after four years as part of her crew. Her captain, Arthur M. Kimberly, was a master mariner trained in the last commercial square-riggers in the Age of Sail. Long before GPS and radar, Captain Kimberly navigated across the world’s oceans and coastlines with sextant, lead line, and charts still credited to Captain Cook. He was as capable a seafarer as has been to sea—all of us who sailed under him respect the gift of experience he and his ship gave us, which we strive to pass on to the next generation of sailing ship mariners.

and do it again. With another gang or two of young people having the times of their lives—quite literally—and let them try to explain the experience of a voyage around the world under square-sail afterwards. In spring of 2018, from the historic waterfront of Lunenburg, Nova Scotia, the

Captain Moreland and his crew transformed the Picton Castle from what was once a freighter (in this view, above, she was working as a minesweeper for the Royal Navy during World War II) to a lofty three-masted barque, capable of sailing around the world.

Capt. Kimberly aboard Romance I went to sea in other fine—and not so fine—vessels afterwards. At sea and ashore, folks often wanted to know what a world voyage was “like.” I found this difficult to explain. Still do. Much later, accepting that I could not adequately convey what being crew under sail on such a voyage meant to me, under able old-school ship masters, sailing with the tradewinds through the islands of the South Pacific, the Far East, the Indian Ocean, the coasts of Africa and the West Indies, over all those blue-water ocean miles, I figured that the best answer was just to put together the finest square-rigged ship I could imagine, 46

barque Picton Castle will set sail with a new gang manning the ship, outward bound on a grand voyage around the world under square rig—the ship’s seventh circumnavigation. Some will be with us for the whole voyage, some will join for shorter three- or four-month legs from ports such as Rarotonga, Bali, or Cape Town, South Africa. I remember when we set out on our first world voyage in the Picton Castle, back in the bitter cold autumn of 1997. This was after a huge refit in Lunenburg. It was an ambitious and exciting project just getting the Picton Castle rigged up and into shape as a square-rigger for deep-sea passagemaking, converting her from a freighter (before that, she was built as a trawler, converted to a minesweeper during World War II, and then worked as a freighter after the war). The effort began in 1991, first searching for the perfect vessel that could be transformed into a square-rigged sailing ship, and finding it up a fjord in Norway. We steamed her across the North Atlantic to Nova Scotia by way of Denmark, England, Spain, Madeira, Bermuda, Connecticut, and Pier 15 South Street Seaport Museum, Isla Manhattoes—New York City, and finally into what would become

our new homeport in Lunenburg. We did the big job in that salty port, rigging and fitting out this 300-ton riveted steel vessel into a sailing ship reminiscent of a bygone era. We essentially took over all the shipyards in town for most of a year, and that was a story in itself. What a project! Finally, all the work was done—or done enough, anyway. We would polish her up at sea while sailing ever westward in the warm tropical tradewinds. There would be plenty of time for all that along the coming lengthy sea passages. It came time to set sail. We had a keen crew aboard, ready to haul braces, steer their ship, get good and warm in the sun, roll with the blue ocean swells, set and stow canvas, tar the rig, eager to see what was over the horizon, sail the seas, explore tropical islands and these amazing storybook ports and remote islands. As we cast off from our wharf, there were folks in town who harbored the notion that we would not get past Cross Island at the mouth of Lunenburg Bay, never mind through the Panama Canal and beyond. I didn’t blame them; they had seen a few dreamy projects drift in their midst, only to die at the docks in Lunenburg. I also did SEA HISTORY 161, WINTER 2017–18