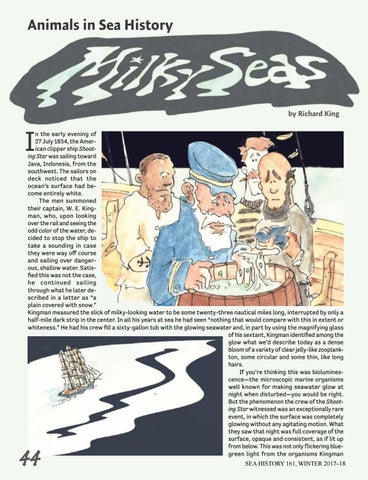 n the early evening of 27 July 1854, the American clipper ship Shooting Star was sailing toward Java, Indonesia, from the southwest. The sailors on deck noticed that the ocean’s surface had become entirely white. The men summoned their captain, W. E. Kingman, who, upon looking over the rail and seeing the odd color of the water, decided to stop the ship to take a sounding in case they were way off course and sailing over dangerous, shallow water. Satisfied this was not the case, he continued sailing through what he later described in a letter as “a plain covered with snow.” Kingman measured the slick of milky-looking water to be some twenty-three nautical miles long, interrupted by only a half-mile dark strip in the center. In all his years at sea he had seen “nothing that would compare with this in extent or whiteness.” He had his crew fill a sixty-gallon tub with the glowing seawater and, in part by using the magnifying glass of his sextant, Kingman identified among the glow what we’d describe today as a dense bloom of a variety of clear jelly-like zooplankton, some circular and some thin, like long hairs. If you’re thinking this was bioluminescence—the microscopic marine organisms well known for making seawater glow at night when disturbed—you would be right. But the phenomenon the crew of the Shooting Star witnessed was an exceptionally rare event, in which the surface was completely glowing without any agitating motion. What they saw that night was full coverage of the surface, opaque and consistent, as if lit up from below. This was not only flickering bluegreen light from the organisms Kingman