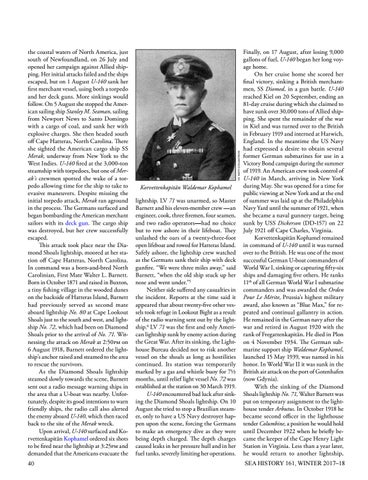 the coastal waters of North America, just south of Newfoundland, on 26 July and opened her campaign against Allied shipping. Her initial attacks failed and the ships escaped, but on 1 August U-140 sank her first merchant vessel, using both a torpedo and her deck guns. More sinkings would follow. On 5 August she stopped the American sailing ship Stanley M. Seaman, sailing from Newport News to Santo Domingo with a cargo of coal, and sank her with explosive charges. She then headed south off Cape Hatteras, North Carolina. There she sighted the American cargo ship SS Merak, underway from New York to the West Indies. U-140 fired at the 3,000-ton steamship with torpedoes, but one of Merak’s crewmen spotted the wake of a torpedo allowing time for the ship to take to evasive maneuvers. Despite missing the initial torpedo attack, Merak ran aground in the process. The Germans surfaced and began bombarding the American merchant sailors with its deck gun. The cargo ship was destroyed, but her crew successfully escaped. This attack took place near the Diamond Shoals lightship, moored at her station off Cape Hatteras, North Carolina. In command was a born-and-bred North Carolinian, First Mate Walter L. Barnett. Born in October 1871 and raised in Buxton, a tiny fishing village in the wooded dunes on the backside of Hatteras Island, Barnett had previously served as second mate aboard lightship No. 80 at Cape Lookout Shoals just to the south and west, and lightship No. 72, which had been on Diamond Shoals prior to the arrival of No. 71. Witnessing the attack on Merak at 2:50pm on 6 August 1918, Barnett ordered the lightship’s anchor raised and steamed to the area to rescue the survivors. As the Diamond Shoals lightship steamed slowly towards the scene, Barnett sent out a radio message warning ships in the area that a U-boat was nearby. Unfortunately, despite its good intentions to warn friendly ships, the radio call also alerted the enemy aboard U-140, which then raced back to the site of the Merak wreck. Upon arrival, U-140 surfaced and Korvettenkapitän Kophamel ordered six shots to be fired near the lightship at 3:25pm and demanded that the Americans evacuate the

Korvettenkapitän Waldemar Kophamel lightship. LV 71 was unarmed, so Master Barnett and his eleven-member crew —an engineer, cook, three firemen, four seamen, and two radio operators—had no choice but to row ashore in their lifeboat. They unlashed the oars of a twenty-three-foot open lifeboat and rowed for Hatteras Island. Safely ashore, the lightship crew watched as the Germans sank their ship with deck gunfire. “We were three miles away,” said Barnett, “when the old ship stuck up her nose and went under.”5 Neither side suffered any casualties in the incident. Reports at the time said it appeared that about twenty-five other vessels took refuge in Lookout Bight as a result of the radio warning sent out by the lightship.6 LV 71 was the first and only American lightship sunk by enemy action during the Great War. After its sinking, the Lighthouse Bureau decided not to risk another vessel on the shoals as long as hostilities continued. Its station was temporarily marked by a gas and whistle buoy for 7½ months, until relief light vessel No. 72 was established at the station on 30 March 1919. U-140 encountered bad luck after sinking the Diamond Shoals lightship. On 10 August she tried to stop a Brazilian steamer, only to have a US Navy destroyer happen upon the scene, forcing the Germans to make an emergency dive as they were being depth charged. The depth charges caused leaks in her pressure hull and in her fuel tanks, severely limiting her operations.

Finally, on 17 August, after losing 9,000 gallons of fuel, U-140 began her long voyage home. On her cruise home she scored her final victory, sinking a British merchantmen, SS Diomed, in a gun battle. U-140 reached Kiel on 20 September, ending an 81-day cruise during which she claimed to have sunk over 30,000 tons of Allied shipping. She spent the remainder of the war in Kiel and was turned over to the British in February 1919 and interned at Harwich, England. In the meantime the US Navy had expressed a desire to obtain several former German submarines for use in a Victory Bond campaign during the summer of 1919. An American crew took control of U-140 in March, arriving in New York during May. She was opened for a time for public viewing at New York and at the end of summer was laid up at the Philadelphia Navy Yard until the summer of 1921, when she became a naval gunnery target, being sunk by USS Dickerson (DD-157) on 22 July 1921 off Cape Charles, Virginia. Korvettenkapitän Kophamel remained in command of U-140 until it was turned over to the British. He was one of the most successful German U-boat commanders of World War I, sinking or capturing fifty-six ships and damaging five others. He ranks 11th of all German World War I submarine commanders and was awarded the Orden Pour Le Mérite, Prussia’s highest military award, also known as “Blue Max,” for repeated and continual gallantry in action. He remained in the German navy after the war and retired in August 1920 with the rank of Fregattenkapitän. He died in Plon on 4 November 1934. The German submarine support ship Waldemar Kophamel, launched 15 May 1939, was named in his honor. In World War II it was sunk in the British air attack on the port of Gotenhafen (now Gdynia). With the sinking of the Diamond Shoals lightship No. 71, Walter Barnett was put on temporary assignment to the lighthouse tender Arbutus. In October 1918 he became second officer in the lighthouse tender Columbine, a position he would hold until December 1922 when he briefly became the keeper of the Cape Henry Light Station in Virginia. Less than a year later, he would return to another lightship, SEA HISTORY 161, WINTER 2017–18