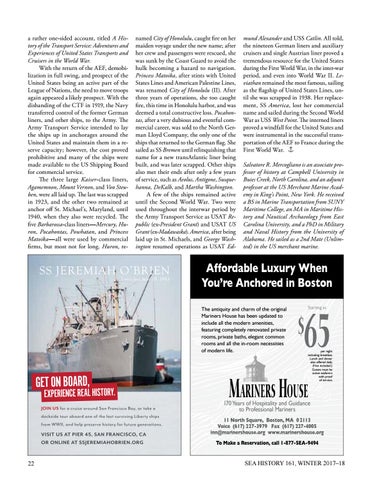 a rather one-sided account, titled A History of the Transport Service: Adventures and Experiences of United States Transports and Cruisers in the World War. With the return of the AEF, demobilization in full swing, and prospect of the United States being an active part of the League of Nations, the need to move troops again appeared a likely prospect. With the disbanding of the CTF in 1919, the Navy transferred control of the former German liners, and other ships, to the Army. The Army Transport Service intended to lay the ships up in anchorages around the United States and maintain them in a reserve capacity ; however, the cost proved prohibitive and many of the ships were made available to the US Shipping Board for commercial service. The three large Kaiser-class liners, Agamemnon, Mount Vernon, and Von Steuben, were all laid up. The last was scrapped in 1923, and the other two remained at anchor off St. Michael’s, Maryland, until 1940, when they also were recycled. The five Barbarossa-class liners—Mercury, Huron, Pocahontas, Powhatan, and Princess Matoika—all were used by commercial firms, but most not for long. Huron, re-

named City of Honolulu, caught fire on her maiden voyage under the new name; after her crew and passengers were rescued, she was sunk by the Coast Guard to avoid the hulk becoming a hazard to navigation. Princess Matoika, after stints with United States Lines and American Palestine Lines, was renamed City of Honolulu (II). After three years of operations, she too caught fire, this time in Honolulu harbor, and was deemed a total constructive loss. Pocahontas, after a very dubious and eventful commercial career, was sold to the North German Lloyd Company, the only one of the ships that returned to the German flag. She sailed as SS Bremen until relinquishing that name for a new transAtlantic liner being built, and was later scrapped. Other ships also met their ends after only a few years of service, such as Aeolus, Antigone, Susquehanna, DeKalb, and Martha Washington. A few of the ships remained active until the Second World War. Two were used throughout the interwar period by the Army Transport Service as USAT Republic (ex-President Grant) and USAT US Grant (ex-Madawaska). America, after being laid up in St. Michaels, and George Washington resumed operations as USAT Ed-

mund Alexander and USS Catlin. All told, the nineteen German liners and auxiliary cruisers and single Austrian liner proved a tremendous resource for the United States during the First World War, in the inter-war period, and even into World War II. Leviathan remained the most famous, sailing as the flagship of United States Lines, until she was scrapped in 1938. Her replacement, SS America, lost her commercial name and sailed during the Second World War as USS West Point. The interned liners proved a windfall for the United States and were instrumental in the successful transportation of the AEF to France during the First World War. Salvatore R. Mercogliano is an associate professor of history at Campbell University in Buies Creek, North Carolina, and an adjunct professor at the US Merchant Marine Academy in King’s Point, New York. He received a BS in Marine Transportation from SUNY Maritime College, an MA in Maritime History and Nautical Archaeology from East Carolina University, and a PhD in Military and Naval History from the University of Alabama. He sailed as a 2nd Mate (Unlimted) in the US merchant marine.

Affordable Luxury When You’re Anchored in Boston The antiquity and charm of the original Mariners House has been updated to include all the modern amenities, featuring completely renovated private rooms, private baths, elegant common rooms and all the in-room necessities of modern life.

per night including breakfast. Lunch and dinner also offered daily (Not included.) Guests must be active seafarers with proof of service.

JOIN US for a cruise around San Francisco Bay, or take a dockside tour aboard one of the last surviving Liberty ships from WWII, and help preserve history for future generations.

VISIT US AT PIER 45, SAN FRANCISCO, CA OR ONLINE AT SSJEREMIAHOBRIEN.ORG