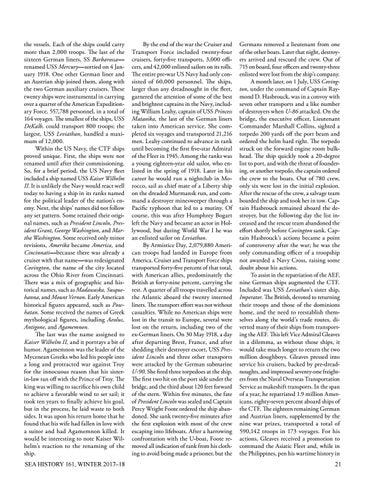 the vessels. Each of the ships could carry more than 2,000 troops. The last of the sixteen German liners, SS Barbarossa— renamed USS Mercury—sortied on 4 January 1918. One other German liner and an Austrian ship joined them, along with the two German auxiliary cruisers. These twenty ships were instrumental in carrying over a quarter of the American Expeditionary Force, 557,788 personnel, in a total of 164 voyages. The smallest of the ships, USS DeKalb, could transport 800 troops; the largest, USS Leviathan, handled a maximum of 12,000. Within the US Navy, the CTF ships proved unique. First, the ships were not renamed until after their commissioning. So, for a brief period, the US Navy fleet included a ship named USS Kaiser Wilhelm II. It is unlikely the Navy would react well today to having a ship in its ranks named for the political leader of the nation’s enemy. Next, the ships’ names did not follow any set pattern. Some retained their original names, such as President Lincoln, President Grant, George Washington, and Martha Washington. Some received only minor revisions, Amerika became America, and Cincinnati—because there was already a cruiser with that name—was redesignated Covington, the name of the city located across the Ohio River from Cincinnati. There was a mix of geographic and historical names, such as Madawaska, Susquehanna, and Mount Vernon. Early American historical figures appeared, such as Powhatan. Some received the names of Greek mythological figures, including Aeolus, Antigone, and Agamemnon. The last was the name assigned to Kaiser Wilhelm II, and it portrays a bit of humor. Agamemnon was the leader of the Mycenean Greeks who led his people into a long and protracted war against Troy for the innocuous reason that his sisterin-law ran off with the Prince of Troy. The king was willing to sacrifice his own child to achieve a favorable wind to set sail; it took ten years to finally achieve his goal, but in the process, he laid waste to both sides. It was upon his return home that he found that his wife had fallen in love with a suitor and had Agamemnon killed. It would be interesting to note Kaiser Wilhelm’s reaction to the renaming of the ship.

By the end of the war the Cruiser and Transport Force included twenty-four cruisers, forty-five transports, 3,000 officers, and 42,000 enlisted sailors on its rolls. The entire pre-war US Navy had only consisted of 60,000 personnel. The ships, larger than any dreadnought in the fleet, garnered the attention of some of the best and brightest captains in the Navy, including William Leahy, captain of USS Princess Mataoika, the last of the German liners taken into American service. She completed six voyages and transported 21,216 men. Leahy continued to advance in rank until becoming the first five-star Admiral of the Fleet in 1945. Among the ranks was a young eighteen-year old sailor, who enlisted in the spring of 1918. Later in his career he would run a nightclub in Morocco, sail as chief mate of a Liberty ship on the dreaded Murmansk run, and command a destroyer minesweeper through a Pacific typhoon that led to a mutiny. Of course, this was after Humphrey Bogart left the Navy and became an actor in Hollywood, but during World War I he was an enlisted sailor on Leviathan. By Armistice Day, 2,079,880 American troops had landed in Europe from America. Cruiser and Transport Force ships transported forty-five percent of that total, with American allies, predominately the British at forty-nine percent, carrying the rest. A quarter of all troops travelled across the Atlantic aboard the twenty interned liners. The transport effort was not without casualties. While no American ships were lost in the transit to Europe, several were lost on the return, including two of the ex-German liners. On 30 May 1918, a day after departing Brest, France, and after shedding their destroyer escort, USS President Lincoln and three other transports were attacked by the German submarine U-90. She fired three torpedoes at the ship. The first two hit on the port side under the bridge, and the third about 120 feet forward of the stern. Within five minutes, the fate of President Lincoln was sealed and Captain Percy Wright Foote ordered the ship abandoned. She sank twenty-five minutes after the first explosion with most of the crew escaping into lifeboats. After a harrowing confrontation with the U-boat, Foote removed all indication of rank from his clothing to avoid being made a prisoner, but the

Germans removed a lieutenant from one of the other boats. Later that night, destroyers arrived and rescued the crew. Out of 715 on board, four officers and twenty-three enlisted were lost from the ship’s company. A month later, on 1 July, USS Covington, under the command of Captain Raymond D. Hasbrouck, was in a convoy with seven other transports and a like number of destroyers when U-86 attacked. On the bridge, the executive officer, Lieutenant Commander Marshall Collins, sighted a torpedo 200 yards off the port beam and ordered the helm hard right. The torpedo struck on the forward engine room bulkhead. The ship quickly took a 20-degree list to port, and with the threat of foundering, or another torpedo, the captain ordered the crew to the boats. Out of 780 crew, only six were lost in the initial explosion. After the rescue of the crew, a salvage team boarded the ship and took her in tow. Captain Hasbrouck remained aboard the destroyer, but the following day the list increased and the rescue team abandoned the effort shortly before Covington sank. Captain Hasbrouck’s actions became a point of controversy after the war; he was the only commanding officer of a troopship not awarded a Navy Cross, raising some doubt about his actions. To assist in the repatriation of the AEF, nine German ships augmented the CTF. Included was USS Leviathan’s sister ship, Imperator. The British, devoted to returning their troops and those of the dominions home, and the need to reestablish themselves along the world’s trade routes, diverted many of their ships from transporting the AEF. This left Vice Admiral Gleaves in a dilemma, as without those ships, it would take much longer to return the two million doughboys. Gleaves pressed into service his cruisers, backed by pre-dreadnoughts, and impressed seventy-one freighters from the Naval Overseas Transportation Service as makeshift transports. In the span of a year, he repatriated 1.9 million Americans, eighty-seven percent aboard ships of the CTF. The eighteen remaining German and Austrian liners, supplemented by the nine war prizes, transported a total of 590,142 troops in 173 voyages. For his actions, Gleaves received a promotion to command the Asiatic Fleet and, while in the Philippines, pen his wartime history in