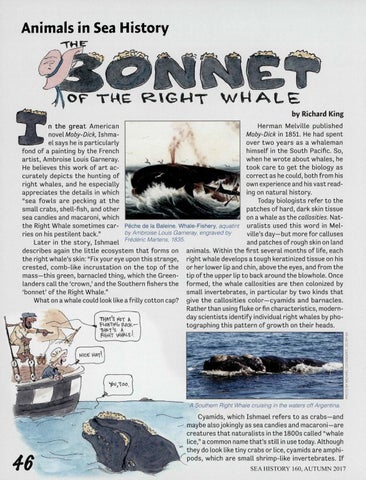 Herman Melville published n the great American Moby-Dick in 1851. He had spent novel Moby-Dick, Ishmaover two years as a whaleman el says he is particularly himself in the South Pacific. So, fond of a painting by the French when he wrote about whales, he artist, Ambroise Louis Garneray. took care to get the biology as He believes this work of art accorrect as he could , both from his curately depicts the hunting of own experience and his vast readright whales, and he especially ing on natural history. appreciates the details in which Today biologists refer to the &quot;sea fowls are pecking at the patches of hard, dark skin tissue small crabs, shell-fish, and other on a whale as the callosities. Natsea candies and macaroni, which the Right Whale sometimes car- Peche de la Baleine. Whale-Fishery, aquatint uralists used this word in Melby Ambroise Louis Garneray, engraved by ville&#39;s day-but more for calluses ries on his pestilent back.&quot; Frederic Martens, 1835. and patches of rough skin on land Later in the story, Ishmael describes again the little ecosystem that forms on animals. Within the first several months of life, each the right whale&#39;s skin: &quot;Fix your eye upon this strange, right whale develops a tough keratinized tissue on his crested, comb-like incrustation on the top of the or her lower lip and chin, above the eyes, and from the mass-this green, barnacled thing , which the Green- tip of the upper lip to back around the blowhole . Once landers call the &#39;crown ,&#39; and the Southern fishers the formed, the whale callosities are then colonized by &#39;bonnet&#39; of the Right Whale.&quot; small invertebrates, in particular by two kinds that What on a whale could look like a frilly cotton cap? give the callosities color-cyamids and barnacles. Rather than using fluke or fin characteristics, modernday scientists identify individual right whales by pho tographing this pattern of growth on their heads.

A Southern Right Whale cruising in the waters off Argentina.

Cyamids, which Ishmael refers to as crabs-and maybe also jokingly as sea candies and macaroni-are creatures that naturalists in the 1800s called &quot;whale lice,&#39;&#39; a common name that&#39;s still in use today. Although Âˇo they do look like tiny crabs or lice, cyamids are amphi,,,- pods, which are small shrimp-like invertebrates. If