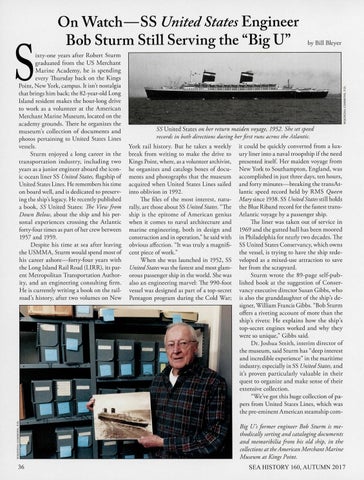 ixty-one years after Robert Sturm graduated from the US Merchant Marine Academy, he is spending every Thursday back on the Kings Point, New York, campus. It isn&#39;t nostalgia that brings him back; the 82-year-old Long Island resident makes the hour-long drive to work as a volunteer at the American Merchant Marine Museum, located on the academy gro unds. There he organizes the museum&#39;s collection of documents and photos pertaining to United States Lines vessels. Sturm enjoyed a long career in the transportation industry, including two years as a junior engineer aboard the iconic ocean liner SS United States, flagship of United States Lines. He remembers his time on board well, and is dedicated to preserving the ship&#39;s legacy. He recently published a book, SS United States: The View from Down Below, abo ut the ship and his personal experiences crossing the Atlantic forty-four times as part of her crew between 1957 and 1959. Despite his time at sea after leaving the USMMA, Sturm would spend most of his career ashore-forty-four years with the Long Island Rail Road (LIRR), its parent Metropolitan Transportation Authority, and an engineering consulting firm. He is currently writing a book on the railroad&#39;s history, after two volumes on New

SS United States on her return maiden voyage, 1952. She set speed records in both directions during her first runs across the Atlantic.

York rail history. But he takes a weekly break from writing to make the drive to Kings Point, where, as a volunteer archivist, he organizes and catalogs boxes of documents and photographs that the museum acquired when United States Lines sailed into oblivion in 1992. The files of the most interest, naturally, are those about SS United States. &quot;The ship is the epitome of American genius when it comes to naval architecture and marine engineering, both in design and construction and in operation,&quot; he said with obvious affection . &quot;It was truly a magnificent piece of work.&quot; When she was launched in 1952, SS United States was the fastest and most glamorous passenger ship in the world. She was also an engineering marvel: The 990-foot vessel was designed as part of a top-secret Pentagon program during the Cold War;

it could be quickly converted from a luxury liner into a naval troopship if the need presented itself. H er maiden voyage from New York to Southampton, England, was accomplished in just three days, ten hours, and forty minutes-breaking the transAt!antic speed record held by RMS Queen Mary since 1938. SS United States still holds the Blue Riband record for the fastest transAtlantic voyage by a passenger ship. The liner was taken out of service in 1969 and the gutted hull has been moored in Philadelphia for nearly two decades. The SS United States Conservancy, which owns the vessel, is trying to have the ship redeveloped as a mixed-use attraction to save her from the scrapyard. Sturm wrote the 89-page self-published book at the suggestion of Conservancy executive director Susan Gibbs, who is also the granddaughter of the ship&#39;s designer, William Francis Gibbs. &quot;Bob Sturm offers a riveting account of more than the ship&#39;s rivets: He explains how the ship&#39;s top-secret en gines worked and why they were so unique,&quot; Gibbs said. Dr. Joshua Smith, interim direccor of the museum, said Sturm has &quot;deep interest and incredible experience&quot; in the maritime industry, especially in SS United States, and it&#39;s proven particularly valuable in their quest to organize and make sense of their extensive collection. &quot;We&#39;ve got this huge collection of papers from United States Lines, w hich was the pre-eminent American steamship comBig U&#39;s former engineer Bob Sturm is methodical!J sorting and cataloging documents and memoribilia from his old ship, in the collections at the American Merchant Marine Museum at Kings Point.