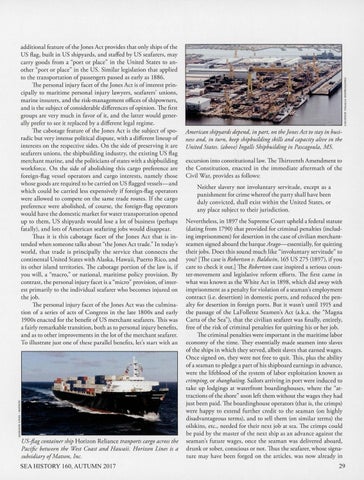 additional feature of rhe Jones Act provides rhar on ly ships of rhe US flag, built in US shipyards, and staffed by US seafarers, may carry goods from a &quot;port or place&quot; in the United States to another &quot;port or place&quot; in the US. Similar legislation that applied to the transportation of passengers passed as early as 1886. The personal injury facet of rhe Jones Act is of interest principally to maritime personal injury lawyers, seafarers&#39; unions, marine insurers, and the risk-management offices of shipowners, and is rhe subject of considerable differences of opinion. The first groups are very much in favor of it, and the latter would generally prefer to see it replaced by a different legal regime. The cabotage feature of the Jones Act is the subject of sporadic but very intense political dispute, with a different lineup of interests on the respective sides. On rhe side of preserving it are seafarers unions , the shipbuilding industry, the existing US flag merchant marine, and the politicians of stares with a shipbuilding workforce. On the side of abolishing this cargo preference are foreign-flag vessel operators and cargo interests, namely those whose goods are required to be carried on US flagged vessels-and which could be carried less expensively if foreign-flag operators were allowed to compete on the same trade routes. If the cargo preference were abolished, of course, the foreign-flag operators would have the domestic market for water transportation opened up to them, US shipyards would lose a lot of business (perhaps fatally), and lots of American seafaring jobs would disappear. Thus it is this cabotage facet of the Jones Act that is intended when someone talks about &quot;rhe Jones Act trade.&quot; In today&#39;s world, that trade is principally the service that connects the continental United States with Alaska, Hawaii, Puerto Rico, and its other island territories . The cabotage portion of rhe law is, if yo u will, a &quot;macro,&quot; or national, maritime policy provision. By contrast, the personal injury facer is a &quot;micro&quot; provision, of interest primarily to the individual seafarer who becomes injured on the job. The personal injury facet of the Jones Act was the culmination of a series of acts of Congress in the late 1800s and early 1900s enacted for the benefit of US merchant seafarers. This was a fairly remarkable transition, both as to personal injury benefits, and as to other improvements in the lot of the merchant seafarer. To illustrate just one of these parallel benefits, let&#39;s start with an

US-flag container ship Horizon Reliance tranports cargo across the Pacific between the West Coast and Hawaii. Horizon Lines is a subsidiary ofMatson, Inc.

American shipyards depend, in part, on the Jones Act to stay in business and, in turn, keep shipbuilding skills and capacity alive in the United States. (above) Ingalls Shipbuilding in Pascagoula, MS.

excursion into constitutional law. The Thirteenth Amendment to the Constitution, enacted in the immediate aftermath of the Civil War, provides as follows: Neither slavery nor involuntary servitude, except as a punishment for crime whereof the party shall have been duly convicted, shall exist within the United States, or any place subject to their jurisdiction. Nevertheless, in 1897 the Supreme Court upheld a federal statute (dating from 1790) that provided for criminal penalties (including imprisonment) for desertion in the case of civilian merchantseamen signed aboard the barque Arago-essentially, for quitting their jobs. Does this sound much like &quot;involuntary servitude&quot; to you? [The case is Robertson v. Baldwin, 165 US 275 (1897), if you care to check it our.) The Robertson case inspired a serious counter-movement and legislative reform efforts. The first came in what was known as the White Act in 1898, which did away with imprisonment as a penalty for violation of a seaman&#39;s employment contract (i.e. desertion) in domestic ports, and reduced the penalty for desertion in foreign ports. But it wasn&#39;t until 1915 and the passage of the Lafollette Seamen&#39;s Act (a.k.a. the &quot;Magna Carta of the Sea&quot;), that the civilian seafarer was finally, entirely, free of the risk of criminal penalties for quirting his or her job. The criminal penalties were important in the maritime labor economy of rhe rime. They essentially made seamen into slaves of the ships in which they served, albeit slaves that earned wages. Once signed on, they were not free to quit. This, plus the ability of a seaman to pledge a part of his shipboard earnings in advance, were the lifeblood of the system of labor exploitation known as crimping, or shanghaiing. Sailors arriving in port were induced to rake up lodgings at waterfront boardinghouses, where the &quot;attractions of the shore&quot; soon left them without the wages they had just been paid. The boardinghouse operators (that is , the crimps) were happy to extend further credit to the seaman (on highly disadvantageous terms), and to sell them (on similar terms) the oilskins, ere., needed for their next job at sea. The crimps could be paid by the master of the next ship as an advance against the seaman&#39;s future wages, once the seaman was delivered aboard, drunk or sober, conscious or nor. Thus rhe seafarer, whose signature may have been forged on the articles, was now already in 29