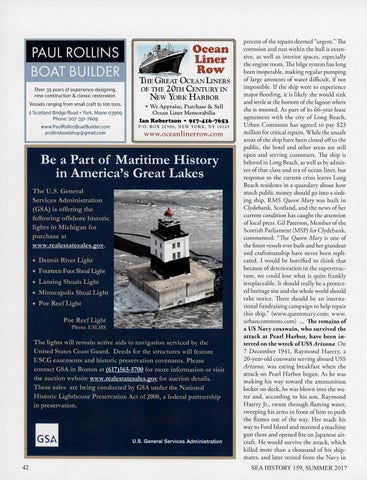 percent of the repairs deemed &quot;urgent.&quot; The corrosion and rust within the hull is extensive, as well as interior spaces, especially the engine room. The bilge system has long been inoperable, making regular pumping of large amounts of water difficult, if not impossible. If the ship were to experience major flooding, it is likely she would sink and settle at the bottom of the lagoon where she is moored. As part of its 66-year lease agreement with the city of Long Beach, Urban Commons has agreed to pay $23 million for critical repairs. While the unsafe areas of the ship have been closed off to the public, the hotel and other areas are still open and serving customers. The ship is beloved in Long Beach, as well as by admirers of that class and era of ocean liner, bur response to the current crisis leaves Long Beach residents in a quandary about how much public money should go into a sinking ship. RMS Queen Mary was built in Clydebank, Scotland, and the news of her current condition has caught the attention oflocal press. Gil Paterson, Member of the Scottish Parliament (MSP) for Clydebank, commented: &quot;The Queen Mary is one of the finest vessels ever built and her grandeur and craftsmanship have never been replicated. I would be horrified to think that because of deterioration in the superstructure, we could lose what is quite frankly irreplaceable. Ir should really be a protected heritage site and the whole world should rake notice. There should be an international fundraising campaign to help repair this ship.&quot; (www.queenmary.com; www. urbancommons.com) .. . The remains of a US Navy coxswain, who survived the attack at Pearl Harbor, have been interred on thewreckofVSSArizona. On 7 December 1941, Raymond Haerry, a 20-year-old coxswain serving aboard USS Arizona, was eating breakfast when the attack on Pearl Harbor began. As he was making his way toward the ammunition locker on deck, he was blown into the water and, according to his son, Raymond Haerry Jr., swam through flaming water, sweeping his arms in front of him to push the flames our of the way. Her made his way to Ford Island and manned a machine gun there and opened fire on Japanese aircraft. He would survive the attack, which killed more than a thousand of his shipmates, and later retired from the Navy in