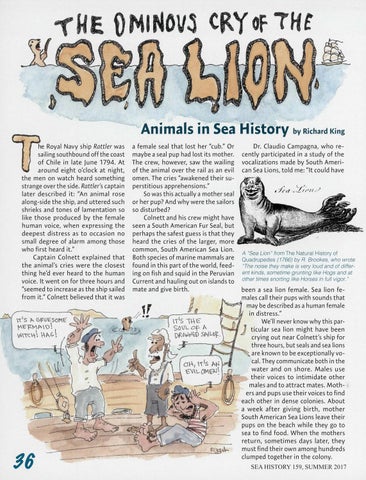 he Royal Navy ship Rattler was ailing southbound off the coast of Chile in late June 1794. At round eight o&#39;clock at night, the men on watch heard something strange over the side. Rattler&#39;s captain later described it: &quot;An animal rose along-side the ship, and uttered such shrieks and tones of lamentation so like those produced by the female human voice, when expressing the deepest distress as to occasion no small degree of alarm among those who first heard it.&quot; Captain Colnett explained that the animal&#39;s cries were the closest thing he&#39;d ever heard to the human voice. It went on for three hours and

a female seal that lost her &quot;cub.&quot; Or maybe a seal pup had lost its mother. The crew, however, saw the wailing of the animal over the rail as an evil omen. The cries &quot;awakened their superstitious apprehensions.&quot; So was this actually a mother seal or her pup? And why were the sailors so disturbed? Colnett and his crew might have seen a South American Fur Seal, but perhaps the safest guess is that they heard the cries of the larger, more common, South American Sea Lion . Both species of marine mammals are found in this part of the world, feeding on fish and squid in the Peruvian Current and hauling out on islands to mate and give birth.

Dr. Claudio Campagna, who recently participated in a study of the vocalization s made by South American Sea Lions, told me: &quot;It could have

A &quot;Sea Lion &quot; from The Natural History of Quadrupedes (1766) by R. Brookes, who wrote &quot;The noise they make is very loud and of different kinds, sometime grunting like Hogs and at other times snorting like Horses in full vigor. &quot;

been a sea lion female. Sea lion females call their pups with sounds that may be described as a human female in distress.&quot; We&#39;ll never know why thi s particular sea lion might have been crying out near Colnett&#39;s ship for three hours, but seals and sea lions are known to be exceptionally vo cal. They commun icate both in the water and on shore. Males use their voices to intimidate other males and to attract mates. Mothers and pups use their voices to find each other in dense colonies. About a week after giving birth , mother South American Sea Lions leave their pups on the beach while they go to sea to find food . When the mothers return, sometimes days later, they must find their own among hundreds clumped together in the colony. SEA HISTORY 159, SUMMER 2017