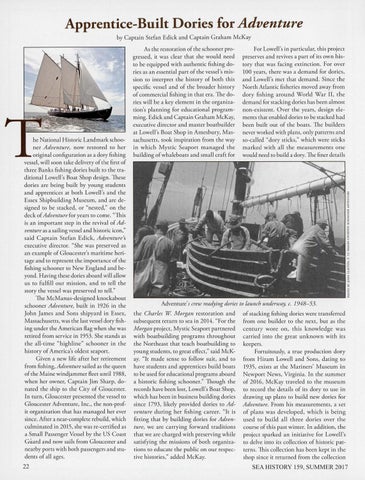 he National Historic Landmark schooner Adventure, now restored to her original configuration as a dory fishing vessel, will soon take delivery of the first of three Banks fishing dories built to the traditional Lowell 's Boat Shop design. These dories are being built by young students and apprentices at both Lowell's and the Essex Shipbuilding Museum, and are designed to be stacked, or "nested," on the deck of Adventure for years to come. "This is an important step in the revival of Adventure as a sailing vessel and historic icon," said Captain Stefan Edick, Adventure's executive director. "She was preserved as an example of Gloucester's maritime heritage and to represent the importance of the fishing schooner to New England and beyond. Having these dories aboard will allow us to fulfill our mission, and to tell the story the vessel was preserved to tell." The McManus-designed knockabout schooner Adventure, built in 1926 in the John James and Sons shipyard in Essex, Massachusetts, was the last vessel dory fishing under the American flag when she was retired from service in 1953. She stands as the all-time "highline" schooner in the history of America's oldest seaport. Given a new life after her retirement from fishing, Adventure sailed as the queen of the Maine windjammer fleet until 1988, when her owner, Captain Jim Sharp, donated the ship to the City of Gloucester. In turn, Gloucester presented the vessel to Gloucester Adventure, Inc., the non-profit organization that has managed her ever since. After a near-complete rebuild, which culminated in 2015, she was re-certified as a Small Passenger Vessel by the US Coast Guard and now sails from Gloucester and nearby ports with both passengers and students of all ages. 22

As the restoration of the schooner progressed, it was clear that she would need to be equipped with authentic fishing dories as an essential part of the vessel 's mission to interpret the history of both this specific vessel and of the broader history of commercial fishing in that era. The dories will be a key element in the organization's planning for educational programming. Edick and Captain Graham McKay, executive director and master boatbuilder at Lowell's Boat Shop in Amesbury, Massachusetts, took inspiration from the way in which Mystic Seaport managed the building of whaleboats and small crafr for

For Lowell 's in particular, this project preserves and revives a part of its own history that was facing extinction. For over 100 years, there was a demand for dories, and Lowell's met that demand. Since the North Atlantic fisheries moved away from dory fishing around World War II, the demand for stacking dories has been almost non-existent. Over the years, design elements that enabled dories to be stacked had been built our of the boats. The builders never worked with plans, only patterns and so-called "dory sticks," which were sticks marked with all the measurements one would need to build a dory. The finer details

Adventure's crew readying dories to launch underway, c. 1948-53. the Charles W Morgan restoration and subsequent return to sea in 2014. "For the Morgan project, Mystic Seaport partnered with boatbuilding programs throughout the Northeast that teach boatbuilding to young students, to great effect," said McKay. "It made sense to follow suit, and to have students and apprentices build boats to be used for educational programs aboard a historic fishing schooner." Though the records have been lost, Lowell 's Boat Shop, which has been in business building dories since 1793, likely provided dories to Adventure during her fishing career. "It is fitting that by building dories for Adventure, we are carrying forward traditions that we are charged with preserving while satisfying the missions of both organizations to educate the public on our respective histories," added McKay.

of stacking fishing dories were transferred from one builder to the next, but as the century wore on, this knowledge was carried into the great unknown with iits keepers. Fortuitously, a true production dory from Hiram Lowell and Sons, dating to 1935, exists at the Mariners' Museum in Newport News, Virginia. In the summer of 2016, McKay traveled to the museum to record the derails of its dory to use in drawing up plans to build new dories for Adventure. From his measurements, a set of plans was developed, which is being used to build all three dories over the course of this past winter. In addition, the project sparked an initiative for Lowell's to delve into its collection of historic patterns. This collection has been kept in the shop since it returned from the collection

10 At War Before the War-SS City of Flint's Ordeal Under the Nazi Flag, by Dr. Donald E. Willett • 16 Copper Bottomed-USS Constitution Rest...

10 At War Before the War-SS City of Flint's Ordeal Under the Nazi Flag, by Dr. Donald E. Willett • 16 Copper Bottomed-USS Constitution Rest...