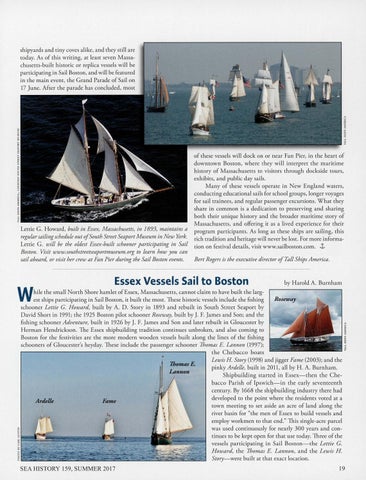 shipyards and tiny coves alike, and they still are today. As of this writing, at least seven Massachusetts-built historic or replica vessels will be participating in Sail Boston, and will be featured in the main event, the Grand Parade of Sail on 17 June. After the parade has concluded, most

Lettie G. Howard, built in Essex, Massachusetts, in 1893, maintains a regular sailing schedule out ofSouth Street Seaport Museum in New York. Lettie G. will be the oldest Essex-built schooner participating in Sail Boston. Visit www.southstreetseaportmuseum.org to learn how you can sail aboard, or visit her crew at Fan Pier during the Sail Boston events.

of these vessels will dock on or near Fan Pier, in the heart of downtown Boston, where they will interpret the maritime history of Massachusetts to visitors through dockside tours, exhibits, and public day sails. Many of these vessels operate in New England waters, conducting educational sails for school groups, longer voyages for sail trainees, and regular passenger excursions. What they share in common is a dedication to preserving and sharing both their unique history and the broader maritime story of Massachusetts, and offering it as a lived experience for their program participants. As long as these ships are sailing, this rich tradition and heritage will never be lost. For more information on festival details, visit www.sailboston.com. .1 Bert Rogers is the executive director of Tall Ships America.

by Harold A. Burnham

hile the small North Shore hamlet of Essex, Massachusetts, cannot claim to have built the largRoseway est ships participating in Sail Boston, it built the most. These historic vessels include the fishing schooner Lettie G. Howard, built by A. D. Story in 1893 and rebuilt in South Street Seaport by David Short in 1991; the 1925 Boston pilot schooner Roseway, built by J. F. James and Son; and the fishing schooner Adventure, built in 1926 by]. F. James and Son and later rebuilt in Gloucester by Herman Hendrickson. The Essex shipbuilding tradition continues unbroken, and also coming to Boston for the festivities are the more modern wooden vessels built along the lines of the fishing schooners of G loucester&#39;s heyday. These include the passenger schooner Thomas E. Lannon (1997); the Chebacco boats Lewis H. Story (1998) and jigger Fame (2003); and the 1bomasE. pinky Ardelle, built in 2011, all by H. A. Burnham. Lannon Shipbuilding started in Essex-then the Chebacco Parish of Ipswich-in the early seventeenth century. By 1668 the shipbuilding industry there had developed to the point where the residents voted at a Ardelle Fame town meeting to set aside an acre of land along the river basin for &quot;the men of Essex to build vessels and employ workmen to that end.&quot; This single-acre parcel was used continuously for nearly 300 years and continues to be kept open for that use today. Three of the vessels participating in Sail Boston-the Lettie G. Howard, the Thomas E. Lannon, and the Lewis H. Story-were built at that exact location.