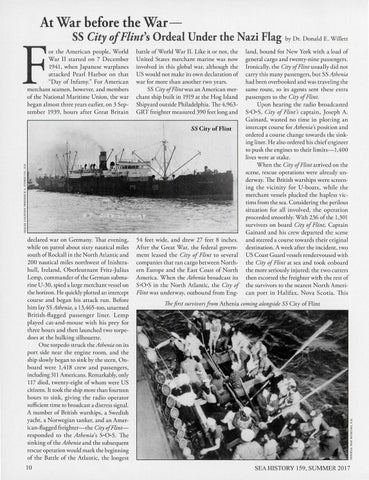 At War before the WarSS City ofFlint&#39;s Ordeal Under the Nazi Flag by Dr. Donald E. Willen or the American people, World War II started on 7 December 1941, when Japanese warplanes attacked Pearl Harbor on that &quot;Day of Infamy.&quot; For American merchant seamen, however, and members of the National Maritime Union, the war began almost three years earlier, on 3 September 1939, hours after Great Britain

battle of World War II. Like it or not, the Un ited States merchant marine was now involved in this global war, although the US would not make its own declaration of war for more than another two years. SS City ofFlint was an American merch ant ship built in 1919 at the Hog Island Shipyard outside Philadelphia. The 4,963GRT freighter meas ured 390 feet long and

declared war on Germany. That evening, while on patrol about sixty nautical miles south ofRockall in the North Atlantic and 200 nautical miles northwest of Inishtrahull, Ireland, Oberleumant Fritz-Julius Lemp, commander of the German submarine U-30, spied a large merchant vessel on the horizon. He quickly plotted an intercept course and began his attack run. Before him lay SS Athenia, a 13,465-ton, unarmed British-flagged passenger liner. Lemp played cat-and-mouse with his prey for three hou rs and then launched two torpedoes at the hulking silhouette. One torpedo struck theAthenia on its port side near the engine room, and the ship slowly began to sink by the stern. Onboard were 1,418 crew and passengers, including 311 Americans. Remarkably, only 117 died, twenty-eight of whom were US citizens. It took the ship more than fourtee n hours to sin k, giving the radio operator sufficient time to broadcast a distress signal. A number of British warships, a Swedish yacht, a Norwegian tanker, and an American-flagged freig hter-the City ofFlintresponded to the Athenia&#39;s S·O·S. The sinking of theAthenia and the subsequent rescue operation would mark the beginning of the Battle of the Atlantic, the longest 10

54 feet wide, and drew 27 feet 8 inches. After the Great War, the federal government leased the City of Flint to several companies that ran cargo between Northern Europe and the East Coast of North America. W hen the Athenia broadcast its S·O·S in the North Atlantic, the City of Flint was underway, outbound from Eng-

land, bound for New York with a load of general cargo and twenty-nine passengers. Ironically, the City ofFlint usually did not carry this many passengers, but SS Athenia had been overbooked and was traveling the same route, so its agents sent these extra passengers to the City ofFlint. Upon hearing the radio broadcasted S·O·S, City of Flint&#39;s captain, Joseph A. Gainard, was ted no time in plotting an intercept course for Athenia&#39;s position and ordered a course change towards the sinking liner. He also ordered his chief engineer to push the engines to their limits-1,400 lives were at stake. When the City ofFlint arrived on the scene, rescue operations were already underway. The British warships were screening the vicinity for U- boats, w hile the merchant vessels plucked the hapless victims from the sea. Considering the perilous situation for all involved, the operation proceeded smoothly. W ith 236 of the 1,301 survivors on board City of Flint, Captain Gainard and his crew departed the scene and steered a course towards their original destination. A week after the incident, two US Coast Guard vessels rendezvoused with the City of Flint at sea and took onboard the more seriously injured; the two cutters then escorted the freighter with the rest of the survivors to the nearest North American port in Halifax, Nova Scotia. This