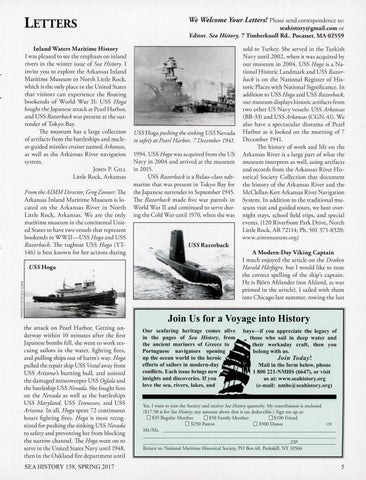 LETTERS Inland Waters Maritime History I was pleased to see the emphasis on inland rivers in the winter issue of Sea History. I invite you to explore the Arkansas Inland Maritime Museum in North Little Rock, which is the only place in the United States that visitors can experience the Boating bookends of World War II : USS Hoga fought the Japanese attack at Pearl Harbor, and USS Razorback was present at the surrender of Tokyo Bay. The museum has a large collection of artifacts from the battleships and nuclear-guided missiles cruiser named Arkansas, as well as the Arkansas River navigation system . JOH N P. GILL Little Rock, Arkansas

From the AIMM Director, Greg Zonner: The Arkansas Inland Maritime Museum is located on the Arkansas River in Nort h Little Rock, Arkansas. We are the only maritime museum in the continental United States to have two vessels that represent bookends to WWII-USS Hoga and USS Razorback. The tugboat USS Hoga (YT146) is best known for her actions during

USS Hoga pushing the sinking USS Nevada to safety at Pearl Harbor, 7 December 1941. 1994. USS Hoga was acquired from the US Navy in 2004 a nd arrived at the museum in 2015. USS Razorback is a Balao-class submarine that was present in Tokyo Bay for the Japanese surrender in September 1945. The Razorback m ade five war patrols in World War II and continued to serve during the Cold War until 1970, when she was

sold to Turkey. She served in the Turkish Navy until 2002, when it was acquired by our museum in 2004. USS Hoga is a National Historic Landmark and USS Razorback is on the National Register of Historic Places with National Significance. In addition to USS Hoga and USS Razorback, our museum displays historic artifacts from two other US Navy vessels: USS Arkansas (BB-33) and USS Arkansas (CGN-4 1). We also h ave a spectacular diorama of Pearl Harbor as it looked on the morning of 7 December 1941. The history of work and life on the Arkansas River is a large part of what the museum interprets as well, using artifacts and records from the Arkansas River Historical Society Collection that document the history of the Arkansas River and the McClellan-Kerr Arkansas River Navigation System. In addition to the traditional museum visit and guided tours , we host overnight stays, school field trips, and special events. (120 Riverfront Park Drive, North Little Rock, AR 72114; Ph. 501 371-8320; www.aimmuseum.org)

USS Razorback A Modern-Day Viking Captain I much enjoyed the article on the D raken Harald Harfagre, but I would like to note the correct spelling of the ship&#39;s captain. He is Bjorn Ahlander (not Ahland, as was printed in the article). I sailed with them into Chicago last summer, rowing the last

Join Us for a Voyage into History the attack on Pearl H arbor. Getting underway within 10 minutes after the first Japanese bombs fell, she went to work rescuing sailors in the water, fighting fires, and pulling ships out of harm&#39;s way. Hoga pulled the repair ship USS Vestal away from USS Arizona&#39;s burning hull, and assisted the damaged minesweeper USS Oglala and the battleship USS Nevada. She fought fires on the Nevada as well as the battleships USS Maryland, USS Tennessee, and USS Arizona. In all, Hoga spent 72 continuous hours fighting fires. Hoga is most recognized for pushing the sinking USS Nevada to safety and preventing her from blocking the narrow channel. The Hoga went on to serve in the United States Navy until 1948, then in the Oakland fire department until SEA HISTORY 158, SPRJNG 2017