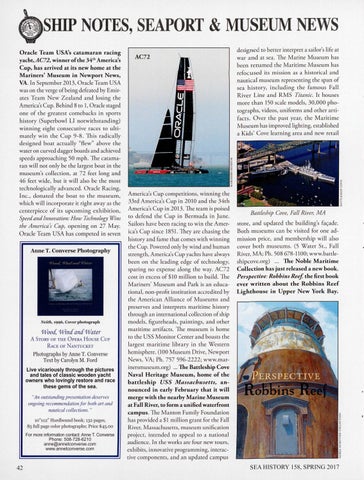 SHIP NOTES, SEAPORT &amp; MUSEUM NEWS Oracle Team USA&#39;s catamaran racing yacht, AC72, winner of the 34&#39;h America&#39;s Cup, h as arrived at its new home at the Marin ers&#39; Museum in Newp ort News, VA. In September 201 3, O racle Team USA was on the verge of being defeated by Emirates Team N ew Zea land and losing the America&#39;s Cup. Behind 8 to 1, Oracle staged one of the greatest com ebacks in sports history (Superbowl LI notwithstanding) winning eight consecutive races to ultim ately win the C up 9-8. This radically designed boat ac tually &quot;Bew&quot; above the water on curved dagger boards and achieved speeds approach ing 50 mph. The catamaran will not only be the largest boat in the museum&#39;s collection, at 72 fee t long and 4 6 feet wide, but it will also be the most technologically advanced . Oracle Racing, Inc., donated the boat to the museum, which will incorporate it right away as the centerpiece of its upcoming exhibition, Speed and Innovation: H ow Technology W&#39;ins the America&#39;s Cup, op ening on 27 M ay. Oracle Team USA has competed in seven Anne T. Converse Ph ot ography

design ed to better interpret a sailor&#39;s life at war and at sea. The M arine Museum has been rena med the M aritime Museum has refocu sed its m ission as a historical and nautical museum representing the span of sea histo ry, including the fam ous Fall River L ine and RMS Titanic. It houses more than 150 scale models, 30,000 photographs, videos, uniforms and other artifacts. O ver the p as t yea r, the M ari ti me M useum has improved lighting, established a Kids&#39; Cove learning area and new retail

America&#39;s C up competitions, winning the 33rd A merica&#39;s C up in 2010 and the 34th America&#39;s C up in 201 3. The team is poised to defend the C up in Bermuda in June. Sa ilors have been racing to win the A merica&#39;s C up since 1851. They are chasing the history and fa me that comes with winning the Cup. Powered only by wind and human strength, America&#39;s Cup yachts have always been on the lead ing edge of technology, sparing no expense along the way. AC72 cost in excess of $10 mill ion to build. The Mariners&#39; M useum and Park is an educational, non-profit institution accredited by the America n Alliance of Museums and preserves and interprets maritime h istory th rough an international collection of ship models, fig ureheads, paintings, and other mari time arti fac ts. The museum is home to the USS Monitor Center and boasts the largest maritime library in the Wes tern hemisphere. (100 M useum D rive, Newport News, VA; Ph. 757 596-2222; www. marinersmuseum.org) ... The Battleship Cove Naval Heritage Museum, home of t h e b attleship USS Massachusetts, ann ounced in early February t h at it will merge with the nearby Marine M useum at Fall River, to form a unified waterfront campus. The Manton Family Foundation has provided a $1 million grant for the Fall River, Massachusetts, museum unifica tion project, intended to appeal to a national audience. In the works are fo ur new to urs, exh ibits, innovative programming, interactive components, and an updated campus