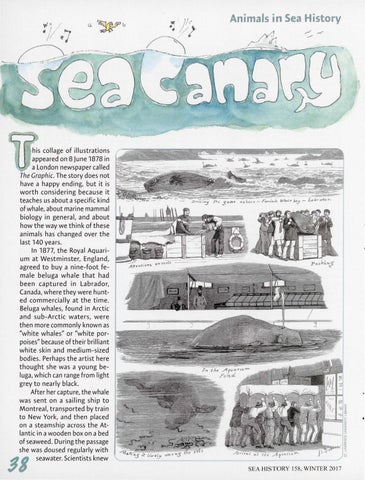 his collage of illustrations ppeared on 8June1878 in a London newspaper called The Graphic. The story does not have a happy ending, but it is worth considering because it teaches us about a specific kind of whale, about marine mammal biology in general, and about how the way we think of these animals has changed over the last 140 years. In 1877, the Royal Aquarium at Westminster, England, agreed to buy a nine-foot female beluga whale that had been captured in Labrador, Canada, where they were hunted commercially at the time. Beluga whales, found in Arctic and sub-Arctic waters, were then more commonly known as &quot;white whales&quot; or &quot;white porpoises&quot; because of their brilliant white skin and medium-sized bodies. Perhaps the artist here thought she was a young beluga, which can range from light grey to nearly black. After her capture, the whale was sent on a sailing ship to Montreal, transported by train to New York, and then placed on a steamship across the Atlantic in a wooden box on a bed of seaweed. During the passage she was doused regularly with seawater. Scientists knew