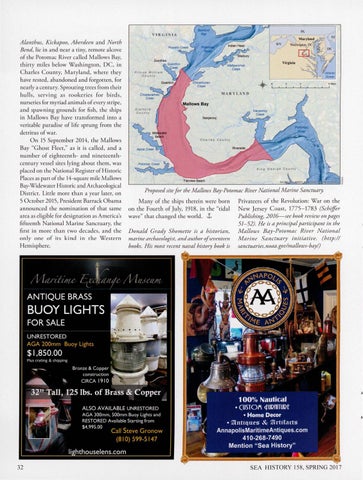 Alanthus, Kickapoo, Aberdeen and North Bend, lie in and near a tiny, remote alcove of the Potomac River called Mallows Bay, thirty miles below Washington, D C, in C harles County, Maryland, where they have res ted, abandoned and forgotten, for nearly a century. Sprouting trees from their hulls, serving as rookeries for birds, nurseries for myriad animals of every stripe, and spaw ning gro unds for fi sh, the ships in Mallows Bay have transformed into a veritable paradise of life sprung from the detritus of war. On 15 September 2014, the Mallows Bay &quot;Ghost Fleet,&quot; as it is called, and a number of eighteenth- and nineteenthcentury vessel sites lying about them, was pl aced on the National Register of Historic Places as part of the 14-square mile Mallows Bay-Widewater Historic and Archaeological District. Little more than a yea r later, on 5 October 2015, President Barrack Obama announced the nomination of that sa me area as eligible for designation as A merica&#39;s fifteenth National Marine Sanctuary, the first in more than two decades, and the only one of its kind in th e W es tern H emisphere.

Proposed site for the Mallows Bay-Potomac River National Marine Sanctuary. Many of the ships therein were born on the Fourth of July, 1918, in the &quot;tidal wave&quot; that changed the world. j:,

D onald Grady Shomette is a historian, marine archaeologist, and author ofseventeen books. His most recent naval history book is