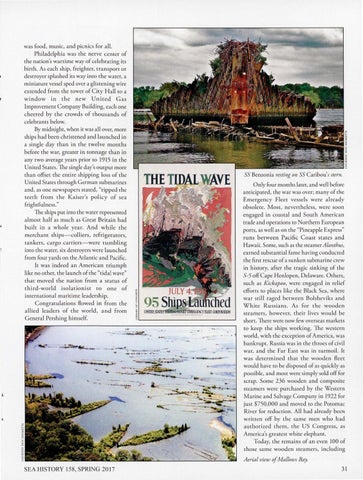 was food, music, and picnics for all. Philadelphia was the nerve center of the nation's wartime way of celebrating its birth. As each ship, freighter, transport or destroyer splashed its way into the water, a miniature vessel sped over a glistening wire extended from the tower of City Hall to a window in the new United Gas Improvement Company Building, each one cheered by the crowds of thousands of celebrants below. By midnight, when it was all over, more ships had been christened and launched in a single day than in the twelve months before the war, greater in tonnage than in any two average years prior to 1915 in the United States. The single day's output more than offset the entire shipping loss of the United States through German submarines and, as one newspapers stated, "ripped the teeth from the Kaiser's policy of sea frightfulness." The ships put into the water represented almost half as much as Great Britain had built in a whole year. And while the merchant ships-colliers, refrigerators, tankers, cargo carriers-were tumbling into the water, six destroyers were launched from four yards on the Atlantic and Pacific. It was indeed an American triumph like no other, the launch of the "tidal wave" that moved the nation from a status of third-world isolationist to one of international maritime leadership. Congratulations flowed in from the allied leaders of the world, a nd from General Pershing himself.

Only four months later, and well before anticipated, the war was over; many of the Emergency Fleet vessels were already obsolete. Most, nevertheless, were soon engaged in coastal and Sourh American trade and operations to Northern European ports, as well as on the "Pineapple Express" runs between Pacific Coast states and Hawaii. Some, such as the steamer Alanthus, earned substantial fame having conducted the first rescue of a sunken submarine crew in history, afrer the tragic sinking of the S-5 off Cape Henlopen, Delaware. Others, such as Kickapoo, were engaged in relief efforts to places like the Black Sea, where war still raged between Bolsheviks and White Russians. As for the wooden steamers, however, their lives would be short. There we re now few overseas markets to keep the ships working. The western world, with the exception of America, was bankrupt. Russia was in the throes of civil war, and the Far East was in turmoil. It was determined that the wooden fleet would have to be disposed of as quickly as possible, and most were simply sold off for scrap. Some 236 wooden and compos ite steamers were purchased by the Western Marine and Salvage Company in 1922 for just $75 0,000 and moved to the Potomac River for reduction. All had already been written off by the same men w ho had authorized them, the US Con gress, as America's greatest white elephant. Today, the remains of an even 100 of those same wooden steamers, including