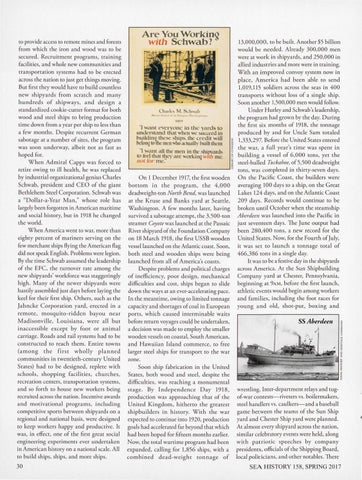 to provide access to remote mines and fores ts fro m wh ich the iron and wood was to be secured . Recru itment programs, training faci lities, and whole new communities and transportation systems had to be erected across the nation to just get things moving. But first they would have to build countless new shipyard s fro m scratch and ma ny hundred s of shipways, a nd d es ig n a standa rdized cookie-cutter fo rmat fo r both wood and steel ships to bring production time down fro m a yea r per ship to less than a few months. D espite recurrent German sabotage at a number of sites, the program was soon underway, albeit nor as fast as hoped for. W hen Admi ral C apps was fo rced to retire owing to ill health, he was replaced by industrial organizational genius C harles Schwab, president and CEO of the giant Bethlehem Steel Corporation. Schwab was a &quot;D ollar-a-Year Man,&quot; whose role h as largely been fo rgotten in American maritime and social history, but in 1918 he changed the wo rld. W hen America went to wa r, more than eighty percent of mariners serving on the few merchant ships flying the American flag did not speak English. Problems were legion. By the time Schwab assumed the leadership of rhe EFC, the turnover rate among the new sh ipya rds&#39; wo rkforce was staggeri ngly high. Many of the newer shipyards were has tily assembled just days before laying the keel fo r their first ship. O thers, such as the Jahncke Corp oration ya rd, erected in a re m o te, m osqu ito-ridden bayo u n ea r Madiso nville, Louisiana, we re all but inaccessi ble except by foo t or an im al carriage. Roads and rail systems had to be constructed to reach them. Enti re tow ns (a m o n g t h e firs t w h olly pl a nn ed communities in twentieth-century U ni ted States) h ad to be designed , replete with schools, sh opping facilit ies, churches, recreation centers, transportation systems, and so for th to house new workers being recruited across the nation. Incentive awa rds and mo tivation al program s, including competitive sports between shipya rds on a regional and national basis, we re designed to keep workers happy and productive. It was, in effect, one of the first great social engineering experiments ever undertaken in A merica n history on a national scale. All to build ships, ships, and more ships. 30

Are You Workin~ with Schwab?

] want everyone in the yards to understand that when we s.uLcced in buildin~ these ships. the credit will belong to the men who actually bui It them .., ~ant all the men in the shipyards to feel that t!Jey are working w1l/1 me.

O n 1 December 1917, the first wooden bo t tom in the program, th e 4, 000 deadweight-ton North Bend, was launched at the Kruse and Banks yard at Seattle, Washington. A few months later, h aving survived a sabotage attempt, the 3,500-ton steamer Coyote was launched at the Passaic River shipyard of the Foundation Company on 18 M arch 1918, the first USS B wooden vessel launched on the Atlantic coast. Soon, both steel and wooden ships were being launched from all of America&#39;s coasts. D espite problems and political charges of inefficiency, poor design, m echanical diffic ulties and cost, ships began to slide down the ways at an ever-accelerating pace. In the meantime, owing to limited tonnage capacity and shortages of coal in European ports, which caused interm in able waits before return voyages could be undertaken, a decision was made to employ the smaller wooden vessels on coastal, South American, and H awaiian Island com merce, to free larger steel ships for transport to the war zone. Soon ship fa brication in the U nited States, both wood and steel, despite the difficulties, was reaching a monumental stage. By Indep end en ce D ay 19 18, production was approaching that of the U nited K ingdom, hitherto the greates t shipbuilders in history. W ith the war expected to continue into 1920, production goals had accelerated fa r beyond rhar which had been hoped for fifteen months earlier. N ow, rhe total wartime program had been expanded, calling for 1,856 ships, with a combined dead -weight tonn age of

13,000,0 00, to be built. Another $5 billion wo uld be needed. Already 300,000 men were at work in sh ipyards, and 25 0,000 in allied industries and more were in training. W ith an improved convoy system now in place, A m erica h ad been able ro send 1,019, 115 soldiers across the seas in 4 00 transports w irhour loss of a single ship. Soon another 1,5 00,000 men would follow. Under Hurley and Schwab &#39;s leadership, the progra m h ad grown by the day. D uring rhe fi rs t six months of 1918, rhe tonnage produced by and fo r U ncle Sam totaled 1,333,297. Before the United Stares entered the wa r, a full year&#39;s rime was spent in building a vessel of 6,000 tons, ye t the steel-hulled Tuckahoe, of 5,500 dead weight tons, was completed in thirty-seven d ays. On rhe Pacific Coast, the builders were averaging 100 days to a ship, on the G reat Lakes 124 d ays, and on the Atlantic C oas t 209 days . Records would continue to be broken until O ctober when the steamship Aberdeen was launched into the Pacific in just seventeen days. The June output had been 280,400 tons, a new record for the United States . N ow, for the Fourth of July, it was se t to launch a tonnage total of 466,386 tons in a single day. It was to be a festive day in the shipya rds across America. At the Sun Shipbuilding Company ya rd at C hester, Pennsylvan ia, beginn ing at 9AM, before the first launch, athletic events wo uld begin among workers and fa milies, including the foot races for yo ung and old, shot-put, boxing and

wrestling. Inter-department relays and rugof-war contests-riveters vs . boilermakers, steel handlers vs. caul kers- and a baseball game between the team s of the Sun Ship yard and C hester Sh ip ya rd were planned. Ar almost every sh ipyard across the nation, similar celebratory events were held, along w ith p at riotic sp eech es by company presidents , officials of the Shipping Board, local policicians, and other notables. There