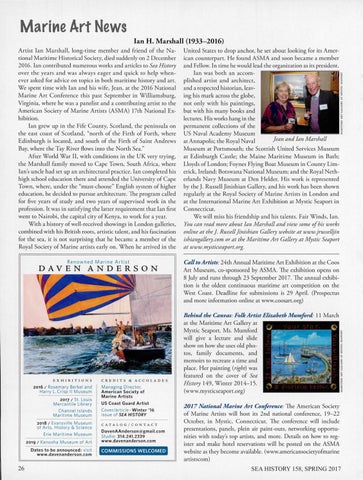 Ian H. Marshall (1933-2016) Artist Ian Marshall, long-time member and friend of the National Maritime Historical Society, died suddenly on 2 D ecember 2016. Ian contributed numerous works and articles to Sea History over the years and was always eager and quick to help wheneve r asked for advice on topics in both maritime history and art. We spent time with Ian and his wife, Jean, at the 2016 National Marine Arr Conference this past September in Williamsburg, Virgi nia, where he was a panelist and a contributing artist to the American Society of Marine Artists (ASMA) 17th National Exh ibition. Ian grew up in the Fife County, Scotland, the peninsula on the eas t coast of Scotland, &quot;north of the Firth of Forth, where Edinburgh is located, and south of the Firth of Saint Andrews Bay, where the Tay River Bows into the North Sea.&quot; After World War II, with conditions in the UK very trying, the Marshall family moved to Cape Town, South Africa, where Ian&#39;s uncle had set up an architectural practice. Ian completed his high school education there and attended the University of Cape Town, where, under the &quot;must-choose&quot; English system of higher education, he decided to pursue architecture. The program called for five yea rs of study and two yea rs of supervised work in the profession. It was in satisfying the latter requirement that Ian first went to Nairobi, the capital city of Kenya, to work for a year. With a history of well-received showings in London galleries, combined with his British roots, artistic talent, and his fascination for the sea, it is not surprising that he became a member of the Royal Society of Marine artists early on. W hen he arrived in the

United States to drop anchor, he set about looking for its American counterpart. He fou nd ASMA and soon became a member and Fellow. In time he wo uld lead the organization as its president. Ian was both an accomplished artist and architect, and a respected historian, leaving his mark across the globe, not on ly with his paintings, but with his many books and lectures. His works hang in the permanent collections of the US Naval Academy M useum at Annapolis; the Royal Naval Jean and Ian Marshall M useum at Portsmouth; the Scottish United Services Museum at Edinburgh Castle; the Maine Maritime Museum in Bath; Lloyds of London; Foynes Flying Boat Museum in County Limerick, Ireland; Botswana National Museum; and the Royal Netherlands Navy M useum at Den Helder. His work is represented by the J. Russell Jinishian Gallery, and his wo rk has been shown reg ularly at the Royal Society of Marine Artists in London and at the International Marine Arr Exhibition at Mystic Seaport in Connecticut. We will miss his friendship and his talents. Fair Winds, Ian.

Call to Artists: 24th Annual Maritime Art Exhibition at the Coos Art Museum, co-sponsored by ASMA. The exhibition opens on 8 July and runs through 23 September 2017. The annual exhibition is the oldest continuous maritime ar t competition on the West Coast. Deadline for submissions is 29 April. (Prospectus and more information online at www.coosart.org)

You can read more about Ian Marshall and view some ofhis works online at the]. Russell ]inishian Gallery website at wwwjrusselljin ishiangallery.com or at the Maritime Art Gallery at Mystic Seaport at www.mysticseaport.org.

at the Maritime Art Gallery at Mystic Seaport. Ms. Mumford will give a lecture and slide show on how she uses old photos, fami ly documents, and memoirs to recreate a time and place. Her painting (right) was featured on the cover of Sea History 149, Winter 2014-15. (www. mys ticseaport.org)

2017 National Marine Art Conference: The American Society of Marine Artists will host its 2nd national conference, 19-22 October, in Mystic, Connecticut. The conference will include presentations, panels, plein air pai nt-outs, networking opportunities with today&#39;s top artists, and more. Details on how to register and make hotel reservations will be posted on the ASMA website as they become available. (www.americansocietyofmarine artistscom)