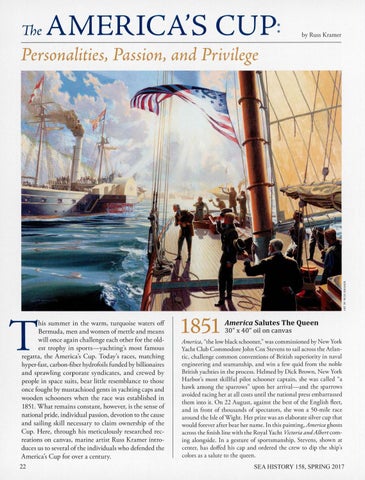 his summer in the warm, turquoise waters off Bermuda, m en and women of mettle and means will once again challenge each other for the oldest trophy in sports-yachting&#39;s most famous regatta, the America&#39;s Cup. Today&#39;s races, matching hyper-fast, carbon-fiber hydrofoils funded by billionaires and sprawling corporate syndicates, and crewed by people in space suits, bear little resemblance to those once fought by mustachioed gents in yachting caps and wooden schooners when the race was established in 1851. What remains constant, however, is the sense of national pride, individual passion, devotion to the cause and sailing skill necessary to claim ownership of the Cup. Here, through his meticulously researched recreations on canvas, marine artist Russ Kramer introduces us to several of the individuals who defended the America&#39;s C up for over a century.

Yacht Club Commodore John Cox Stevens to sail across the Atlantic, challenge common conventions of British superiority in naval engineering and seamanship, and win a few quid from the noble British yachties in the process. Helmed by Dick Brown, New York Harbor&#39;s most skillful pilot schooner captain, she was called &quot;a hawk among the sparrows&quot; upon her arrival-and the sparrows avoided racing her at all costs until the national press embarrassed them into it. On 22 August, against the best of the English fleet, and in front of thousands of spectators, she won a 50-mile race around the Isle of Wight. Her prize was an elaborate silver cup that would forever after bear her name. In this painting, America ghosts across the finish line with the Royal Yacht Victoria and Albert coming alongside. In a gesture of sportsmanship, Stevens, shown at center, has doffed his cap and ordered the crew to dip the ship&#39;s colors as a salute to the queen. SEA HISTORY 158, SPRING 2017