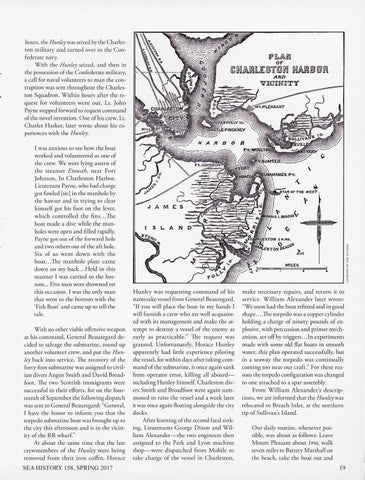 hours, the Hunley was seized by the C harleston military and turned over to the Confederate navy. With the Hunley seized, and then in the possession of the Confederate military, a call for n aval volunteers to man the contraption was sent throughout the C harleston Squadro n. Within hours after the request for volunteers went out, Lt. John Payne stepped forward to request command of the novel invention. One of his crew, Lt. Charles H asker, later wrote about his experiences with the Hunley. I was anxio us to see how the boat worked and volunteered as one of the crew. We were lying as tern of the steam er Etowah, near Fort Johnson, In Ch arleston Harbor. Lieutenant Payne, who had charge got fow led [sic] in the manhole by the hawser and in trying to clear himself got his foot on the lever, which controlled the fins ...The boat made a dive while the m anholes were open and filled rapidly. Payne go t out of the forward hole and two others out of the aft hole. Six of us went down with the boat. ..The manhole plate came down on my back. .. Held in this manner I was carried to the bottom ... Five men were drow ned on this occasion. I was the only m an that went to the bottom with the &#39;Fish Boat&#39; and came up to tell the tale. With no other viable offensive weapon at his command , General Beauregard decided to salvage the submarine, ro und up another volunteer crew, and put the Hunley back into service. The recovery of the forty-foot submarine was assigned to civilian divers Angus Smith and David Broadfoot. The two Scottish immigrants were successfu l in their efforts, for on the fourteenth of September the following dispatch was sent to General Beauregard: &quot;General, I have the honor to inform yo u that the torpedo submarine boat was brought up to the city this afternoon and is in the vicinity of the RR wharf.&quot; At about the same time that the late crewmembers of the Hunley were bei ng removed from their iron coffin , H orace SEA HISTORY 158, SPRING 2017

Hun ley was requesting command of his namesake vessel from General Beaurega rd. &quot;If you will place the boat in my hands I will furnish a crew who are well acquainted with its management and make the attempt to destroy a vessel of the enemy as ea rly as prac ticable.&quot; The reques t was granted. Unfortunately, Horace Hunley apparently h ad little exp erience piloting the vessel, for within days after raking command of the submarine, it once again sank from operator error, killing all aboardincluding Hun ley himsel f. C harleston divers Smith and Broadfoot were again summoned to raise the vessel and a week later it was once again floati ng alongside the city docks. After learning of the second fatal sinking, Lieutenants George Dixon and W illiam Alexander-the two engineers then assigned to the Park and Lyon machine shop-were dispatched from Mobile to cake charge of the vessel in C h arlesron,

make necessa ry repairs, and return it to service. William Alexander later wrote: &quot;We soon had the boat refitted and in good shape ....The torpedo was a copper cylinder holding a charge of ninety pounds of explosive, with percussion and primer mechanism , set off by triggers .. .In experiments made with some old flat boats in smooth water, this plan operated successfully, but in a seaway the torpedo was continually coming too near our craft.&quot; For these reasons the torpedo configuration was changed to one attached to a spar assembly. From William Alexander&#39;s descriptions, we are informed that the Hunley was relocated to Breach Inlet, at the northern tip of Sulli va n&#39;s Island. Our daily routine, whenever possible, was about as follows: Leave Mount Pleasant about lPM , walk seven miles to Battery Marshall on the beach, take the boat out and