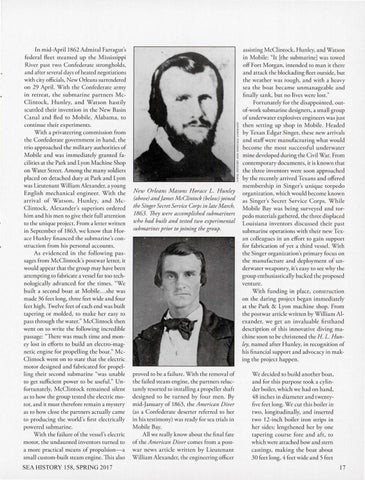 In mid-April 1862 Ad miral Farragut's federal fleet stea med up th e Mississippi River past rwo Co nfederate strongholds, and after several days of heated negoriarions with city officials, New Orleans surrendered on 29 April. With rhe Confederate army in retreat, rhe subma rine partners McC lintock, Hunley, and Warson hastily scurried their invention in rhe New Basin Canal and fl ed to Mobile, Alabama, to continue their experiments. With a privateering commission from rhe Confederate government in hand, rhe trio approached rhe military authorities of Mobile and was immediately granted faci l iries ar the Park and Lyon Machine Shop on Water Street. Among the many soldiers placed on detached duty ar Park and Lyo n was Lieutenant William Alexander, a young English mechanical engineer. With the arrival of Watson, Hunley, a nd McC lintock, A lexander's superiors ordered him and his men to give their full at tention to rhe unique project. From a letter written in September of 1863, we know that Horace Hunley financed rhe submarine's construction from his personal acco unts. As ev idenced in the following p assages from McClintock's postwar letter, it wou ld appear rhar rhe group may have been attempting to fabricate a vessel far too technologically adva nced for the rimes. "We built a second boar at Mobi le ... she was made 36 feet long, three feet wide and four feet high. Twelve feet of each end was built tapering or molded, to make her easy to pass through rhe water." McClintock rhen went on to write the following incredible passage: "There was much rime and money lost in efforts to build an electro-magnetic engine for propelling the boar." M cClintock went on to stare that rhe electric motor designed and fabricated for propelling rheir second submarine "was unable to get sufficient power to be useful. " Unfortunately, McClinrock remain ed si lent as to how rhe group rested rhe electric motor, and it must therefore remain a mys tery as to how close the partners actually came to producing rhe world's first electrically powered submarine. With rhe failure of the vessel's electric motor, rhe undaunted inventors turned to a more practical mea ns of propulsion-a small custom-built steam engine. This also SEA HISTORY 158, SPRING 2017

proved to be a fa ilure. With the removal of rhe failed steam engine, the partners relucranrly resorted to installing a propeller shaft designed to be turned by fou r men. By mid-January of 1863, the American Diver (as a C onfederate deserter referred to her in his testimon y) was ready for sea trials in Mobile Bay. All we really know about the final fate of rhe American Diver comes from a postwar news article written by Lieutenant William Alexander, the engineering officer

assisting McClinrock, Hunley, and Warson in Mobi le: "Ir [the submarine] was towed offForr Morgan, inrended to man ir there and arrack rhe blockading fl eer outside, but rhe weather was rough, and with a heavy sea rhe boar became unmanageable and finally sank, bur no lives were lost." Fortunately for the disappoinred, outof-work submarine designers, a small gro up of underwater explosives engineers was just rhen setting up shop in Mobile. H eaded by Texan Edgar Singer, these new arri vals and staff were manufacturing wh at wo uld become the most successful underwater mine developed during rhe C ivil War. From conremporary documenrs, it is known that the three invenrors were soon approached by the recenrly arrived Texans and offered membership in Singer's unique torpedo organization, which would beco me known as Singer's Secret Service Corps. While Mobile Bay was being surveyed and torpedo materials gathered, the three displaced Louisiana inve ntors discussed their pas t submarine operations with their new Texan colleagues in an effort to gain support for fabrica tion of yet a third vessel. With rhe Singer organization's primary foc us on the manufacture and deploymenr of underwater weaponry, it's easy to see why the group enrhusiasrically backed the proposed venture. With fundin g in place, construction on the daring project began immediately at the Park & Lyo n machine shop. From rhe postwar article written by Wi lliam Alexander, we get an inva luabl e firsthand description of this innovative diving machine soon to be christened the H. L. H unley, named after Hunley, in recognition of his financial support and advocacy in making the proj ect happen. We decided to build another boar, and for this purpose took a cylinder boiler, w hich we had on hand, 48 inches in diameter and twenryfive feet lon g. We cut rhis boiler in two, longitudin ally, and inserted two 12-inch boiler iron strips in her sides; lengthened her by one tapering co urse fore and aft, to which were attached bow and stern castings, mak ing the boat about 30 feet long, 4 feet wide and 5 feet 17