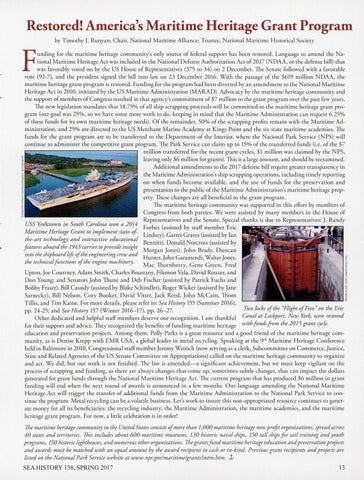 uncling for the maritime heritage community&#39;s only source of federal support has been restored. Language to amend the National Maritime Heritage Act was included in the National D efense Authorization Act of2017 (N DAA, or the defense bill) that was favorably voted on by the US House of Representatives (375 to 34) on 2 December. The Senate followed with a favorable vote (92-7), and the president signed the bill into law on 23 December 2016. With the passage of the $619 million NDAA, rhe maritime heritage grant program is restored. Funding for the program had been diverted by an amendment to the National Maritime Heritage Act in 2010, initiated by the US Maritime Administration (MARAD). Advocacy by the maritime heritage community and the support of members of Congress resulted in that agency&#39;s commitment of $7 million to the grant program over the past few years. The new legislation mandates char 18.75% of all ship scrapping proceeds will be committed to the maritime heritage grant program (our goal was 25%, so we have some more wo rk to do, keeping in mind that the M aritime Administration can request 6.25% of these funds for its own maritime heritage needs). Of the remainder, 50% of the scrappi ng profits remain with rhe Maritime Administration, and 25% are directed to the US M erchant Marine Academy at Kings Point and the six state maritime academies. The funds for the grant program are to be transferred to the D epartment of the Interior, where the National Park Service (N PS) will continue to administer the competitive gram program . The Park Service can claim up to 15% of the transferred funds (i.e. of the $7 million transferred for the recent gram cycles, $1 million was claimed by the NPS , leaving only $6 million for grams). This is a large amount, and should be reexamined. Additional amendments to the 20 17 defense bill require greater transparency in the Maritime Administration&#39;s ship scrapp ing operations, including timely reporting on when funds become available, and the use of funds for the preservation and presentation to the public of the Maritime Administration&#39;s maritime heritage property. These changes are all beneficial to the gram program. The maritime heritage community was supported in this effort by members of Congress from both parties. We were assisted by many members in the House of Representatives and the Senate. Special thanks is due to Representatives: J. Randy USS Yorktown in South Carolina won a 2014 Forbes (assisted by staff member Eric Ma ritime H eritage Grant to implement state-of Lindsey), Garret Graves (assisted by Ian the-art technology and interactive educational Bennin), Donald No rcross (ass isted by features aboard the 1943 carrier to p rovide insight Morgan Jones), John Brady, Duncan into the shipboard life ofthe engineering crew and Hunter, John Garamendi, Walter Jones, the technical functions ofthe engine machinery. M ac Th orn b erry, G ene G reen, F re d Upton, Joe Courtney, Adam Smith, Charles Boustany, Filemon Vela, David Rouzer, and Don Young; and Senators John Thune and Deb Fischer (assisted by Patrick Fuchs and Bobby Fraser), Bill Cassidy (assisted by Blake Schindler), Roger W icker (assisted by Jane Sarnecky), Bill Nelson, Cory Booker, D avid Viner, Jack Reed, John McCain, Thom Tillis, and Tim Kaine. For more derails, please refer to: Sea History 155 (Summer 2016), Two locks ofthe &quot;Flight ofFive&quot; on the Erie pp. 24-25; and Sea History 157 (Wimer 2016-17), pp. 26-27. Canal at Lockport, New York, were restored Other dedicated and helpful staff members deserve our recognition. I am thankful with funds ftom the 2015 grant cycle. for their support and advice. They recognized the benefits of funding maritime heritage education and preservation projects. Among them : Polly Parks is a great reso urce and a good fri end of the maritime heritage community, as is Denise Krepp with EMR USA, a global leader in metal recycling. Speaking at the 9&#39;h Maritime Heritage Conference held in Baltimore in 2010, Congressional staff member Jeremy Weirich (now serving as a clerk, Subcommittee on Commerce, Justice, State and Related Agencies of the US Senate Committee on Appropriations) called on the maritime heritage community to organize and ac t. We did, bur our work is nor finished . The law is amended-a significant achievement, bur we must keep vigilant on the process of scrapping and funding, as there are always changes that come up, sometimes subtle changes, that can impact the dollars generated for gram funds through the National Maritime Heritage Act. The current program that has produced $6 million in grant funding will end when the next round of awa rds is announced in a few months. Our lang uage amending the National Maritime H eritage Act wi ll trigger the transfer of additional funds from the Maritime Administration to the National Park Service to continue the program. Metal recycling can be a volatile business . Let&#39;s work to insure this non-appropriated resource continues to generate money for all its beneficiaries: the recycling industry, the Maritime Administration, the maritime academies, and the maritime heritage grant program. For now, a little celebration is in order!

The maritime heritage community in the United States consists ofmore than 1, 000 maritime heritage non-profit organizations, spread across 40 states and territories. This includes about 600 maritime museums, 13 0 historic naval ships, 150 tall ships for sail training and youth p rograms, 150 historic lighthouses, and numerous other organizations. The grants fund maritime heritage education andpreservation p rojects and awards must be matched with an equal amount by the award recipient in cash or in-kind. Previous grant recipients and projects are listed on the National Park Service website at www.nps.gov/maritimelgrantslintro.htm. ,,!.