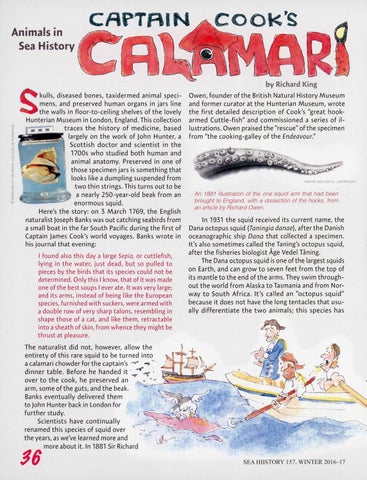 kulls, diseased bones, taxidermed animal specimens, and preserved human organs in jars line the walls in floor-to-ceiling shelves of the lovely Hunterian Museum in London, England. This collection traces the history of medicine, based largely on the work of john Hunter, a Scottish doctor and scientist in the 1700s who studied both human and animal anatomy. Preserved in one of those specimen jars is something that looks like a dumpling suspended from two thin strings. This turns out to be a nearly 250-year-old beak from an enormous squid. Here&#39;s the story: on 3 March 1769, the English naturalist Joseph Banks was out catching seabirds from a small boat in the far South Pacific during the first of Captain James Cook&#39;s world voyages. Banks wrote in his journal that evening: I found also this day a large Sepia, or cuttlefish, lying in the water, just dead, but so pulled to pieces by the birds that its species could not be determined. Only this I know, that of it was made one of the best soups I ever ate. It was very large; and its arms, instead of being like the European species, furnished with suckers, were armed with a double row of very sharp talons, resembling in shape those of a cat, and like them , retractable into a sheath of skin, from whence they might be thrust at pleasure.

Owen, founder of the British Natural History Museum and former curator at the Hunterian Museum, wrote the first detailed description of Cook&#39;s &quot;great hookarmed Cuttle-fish&quot; and commiss ioned a series of illustrations. Owen praised the &quot;rescue&quot; of the specimen from &quot;the cooking-galley of the Endeavour.&quot;

An 1881 illustration of the one squid arm that had been brought to England, with a dissection of the hooks, from an article by Richard Owen.

In 1931 the squid received its current name, the Dana octopus squid (Taningia danae), after the Danish oceanographic ship Dana that collected a specimen. It&#39;s also sometimes called the Tan ing&#39;s octopus squid, after the fisheries biologist Age Vedel Tclning. The Dana octopus squid is one of the largest squids on Earth, and can grow to seven feet from the top of its mantle to the end of the arms. They swim throughout the world from Alaska to Tasmania and from Norway to South Africa. It&#39;s called an &quot;octopus squid&quot; because it does not have the long tentacles that usually differentiate the two animals; this species has

The naturalist did not, however, allow the entirety of this rare squid to be turned into a calamari chowder for the captain&#39;s ........ ~ ~ Âˇ dinner table . Before he handed it Âˇ-.r&quot;&quot;&quot;&quot;-&quot;&quot;t : ~k~~~~~~over to the cook, he preserved an &quot;__ arm, some of the guts, and the beak. Banks eventually delivered them to john Hunter back in London for further study. Scientists have continually renamed this species of squid over the years, as we&#39;ve learned more and more about it. In 1881 Sir Richard